I was honoured to be included in a special display of Australian quilts that will be shown in France next month.
The exhibition is called Australia Quilts- Exceptional Quilts from the Great Southern Land. 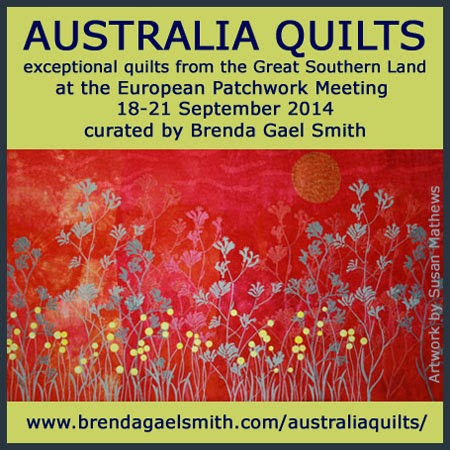 The exhibition will be on show at the Carrefour European du Patchwork/ European Patchwork Meeting 2014, which will be held on 18th-21st September 2014.

The exhibition was curated by Brenda Gael Smith, I am always amazed at Brenda's extraordinary talents and I know that she has worked very hard for this exhibition.

My quilt Holiday Waltz was chosen to be in the exhibition and I feel very honoured to be in such illustrious company. If you click on this link  Australia Quilts you will see quilts by the best of Australian Quilters and I am quite humbled to be included. As you mouse over the thumbnails a bigger photo comes into view.

I would love to go over there and see the quilt show; I've never been to France.

I belong to a group called the Waverley Art Quilters and we meet once a month to study a different artist, theme or technique and in May we were studying Sydney Long.

Sydney Long was an Australian landscape artist who was born in Goulburn NSW on 20th August 1871 and died in London on the 23rd January 1955.

He became known for his lyrical and graceful Art Nouveau style landscapes and in his later years his work evolved into a decorative, symbolist style.
He won the Wynne Prize for Landscape in 1938 for The Approaching Storm and in 1940 for The Lake.

Sydney Long was also known as a master etcher but when the etching boom collapsed in the mid 1930s he went back into painting.

People loved his flamingo paintings and because they sold so well he painted many of them.

After much deliberation and attempts on two different quilt designs, I finally settled on making a Flamingo quilt. After I had made that decision it was amazing that I saw flamingos everywhere I looked.

I saw birthday cards, perfume advertisements, baby clothes labels, even printer ink, there were flamingos everywhere, it is quite amazing what you notice when a subject is in your mind.

Because I am still interested in how to make successful reflections in a quilt I drew up a flamingo and his reflection and tried to crop it in an interesting manner.

I used batik fabrics because they fuse so well with no fraying which means I don't have to do any stitching on the edges, I can quilt over the entire piece to secure everything and it gives a more realistic appearance to the bird.

Here are a couple of close up photos of the flamingo and his reflection. 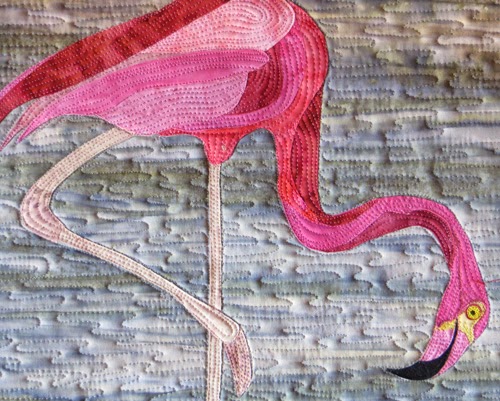 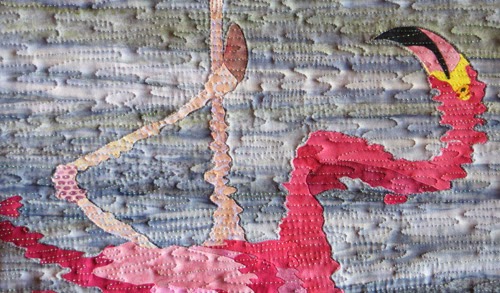 Sydney Long was known for his more subdued colours which is why I chose a background fabric that was a more muted blue than I would have normally chosen.

I also read that Sydney was thought to be an odd man who was jealous and envious of other people's success and he always thought that he deserved more recognition than he got.

Poor Sydney, that is a dangerous frame of mind and an easy trap to fall into. I decided a few years ago that we are all on our own path and there is room for all of us and the only person that I compete with is myself in my quest to improve.

The World Quilt Show opened this week in Manchester, New Hampshire, USA. I received the wonderful news that my quilt Christmas Crazy won an Honourable Mention in the Traditional Category.

I was especially thrilled because it was in the same section as the applique quilts and although judges usually say how lovely my quilts are, they usually award the prizes to the appliqued ones.

Three other Australians won prizes and you can see all the list of winners and photos by clicking on this link, World Quilt Show 2014

After this show the quilts will tour the USA going to Pennsylvania National Quilt Extravaganza in September, the Pacific International Quilt Festival in San Francisco, in October and the World Quilt Show in Florida in January 2015.

I won't see my quilt again until next year. My Christmas quilt won't be home for Christmas!

My quilts are definitely more travelled than me.

It's been a busy year so far with the cruise and the Quilt Show and I have got a little behind in posting what I've been up to with the Waverley Art Quilters. In March this year we studied David Hockney.

David Hockney is considered to be one of the most influential artists of the 20th century and is known for his brightly coloured paintings.

He was born in Bradford, England on the 9th July 1937 and is still alive. He is very protective of the copyright of his paintings and if you go to his website by clicking the link on his name- David Hockney you will find that you have to agree not to copy his work in anyway. We had to be very careful when we were planning what we would do.

His paintings are beautiful and I love the bright colours, I wouldn't dare put any of the photos on my blog but if you go to Google Images you will see many of his paintings.

David Hockney studied at the Royal College of Art in London and after graduating in 1962 he moved to Los Angeles. He is famous for his swimming Pool paintings and is considered a pop artist although he doesn't like the term.

I borrowed a book from the library but the work I was drawn to was his later work that was not in the book. 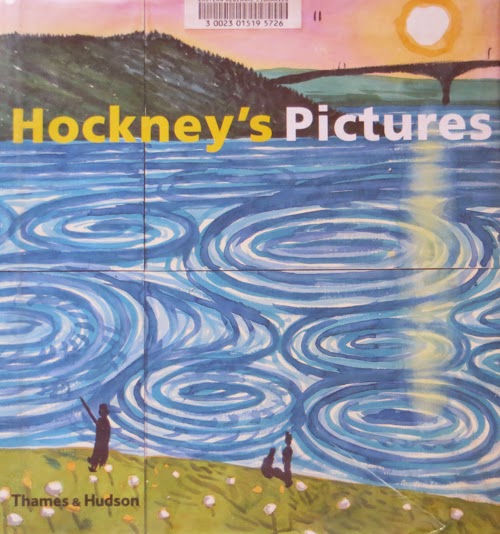 I chose a photo I had taken on one of my morning walks but decided to reproduce it in the bright colours that David Hockney uses. 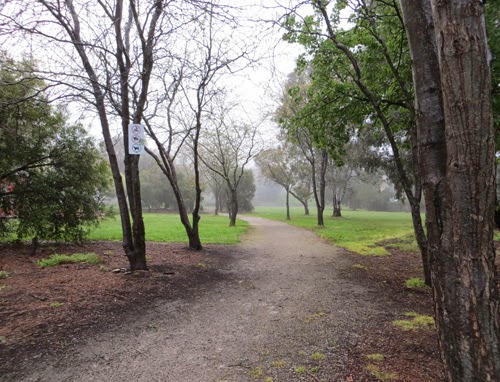 I cropped the photo in Photoshop and printed it out on an A3 printer and then traced the pattern. I fused the pieces with Vliesofix. 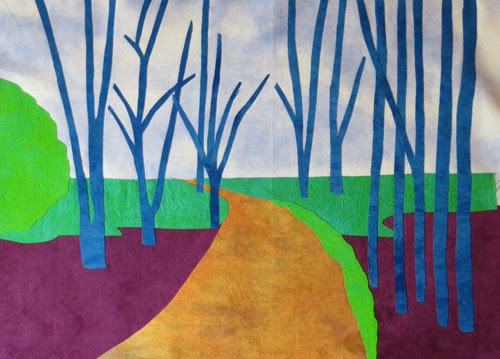 I decided not to do any surface stitching and basted the three layers together ready for quilting. 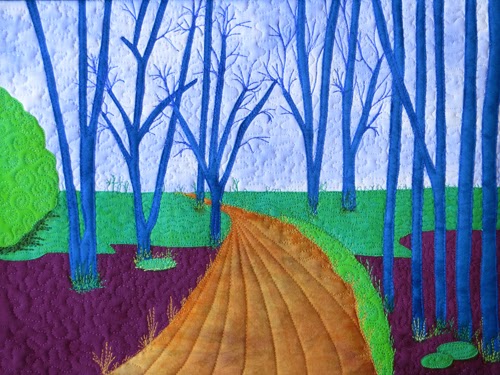 I didn't like the shape of the path and so I added some more shrubs on the side to make it not so wide. 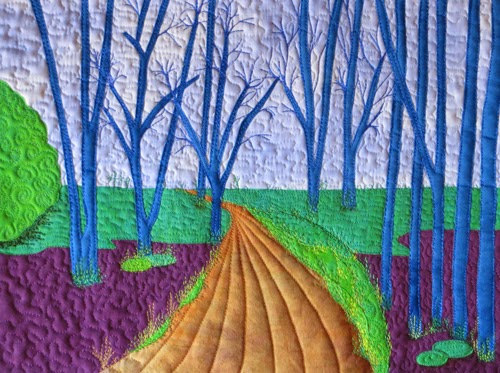 I liked it a bit better and I love the blue trees and I looked at it for a couple of months until I realised what was bothering me. The horizon line is in the centre of the quilt and that is a no-no in pictorial art design.

I put the photo of the quilt into Photoshop and cropped off the bottom and liked it a lot better. 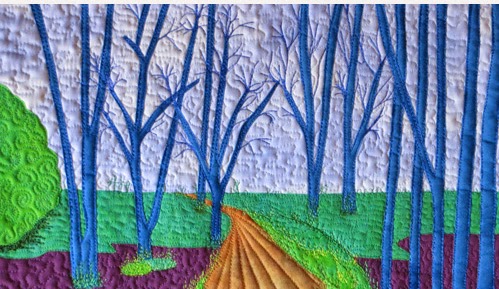 That is one of the good things about belonging to this group, I get a chance to experiment on a small scale and the only way to truly learn and improve is to actually do the work.

I have to take more care in the initial designing stage to make sure I don't fall for the same trap in the future.

I am managing to keep up to date with the Southern Cross Crazies Round Robin. Last month I had Alison's blocks to choose from. Everyone in the Round Robin  made 8 base blocks and then they picked a theme for the embroidery. Alison had chosen an underwater theme, just like Helen had a couple of months ago.

I picked one of the blocks that would suit the sort of stitching that I do. 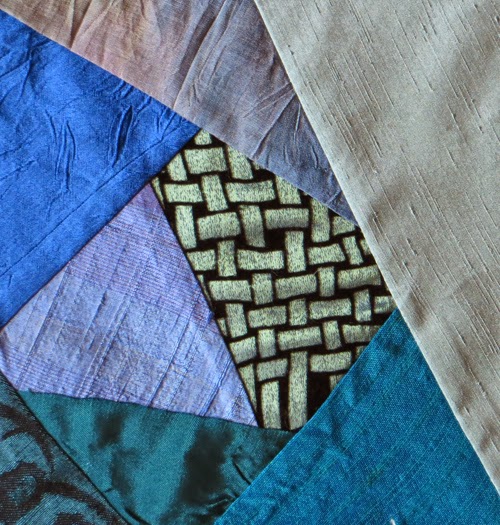 Alison had chosen silk fabrics in blues and greens but the dark fabric in the centre that looks a bit woven had a lot of texture, it felt like a cross between micro-fibre and velvet.

Here's what it looked like when it was finished. 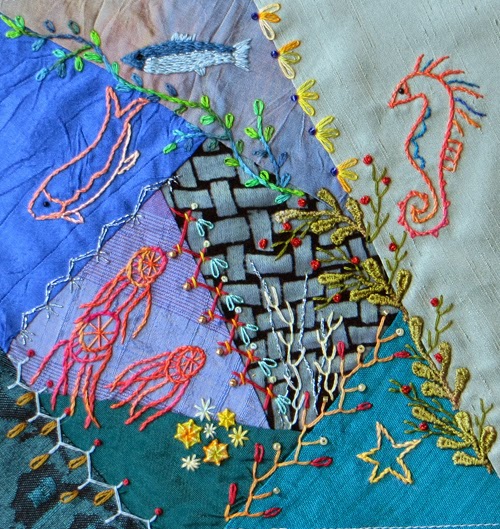 This time I remembered to take photos of the other blocks that people had already made. 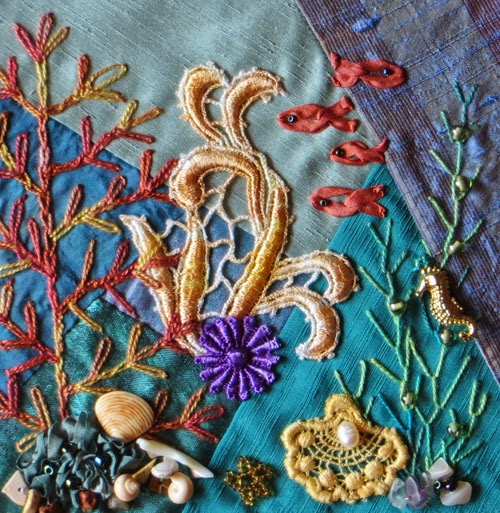 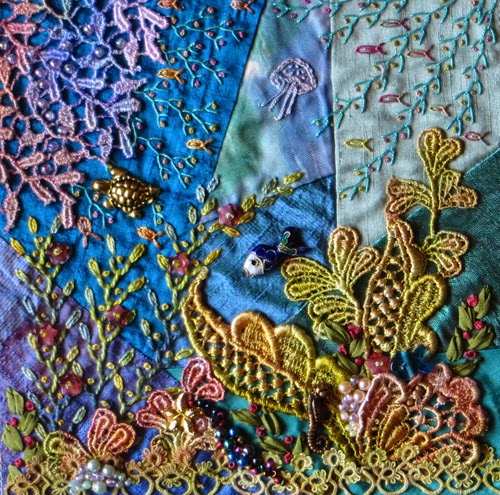 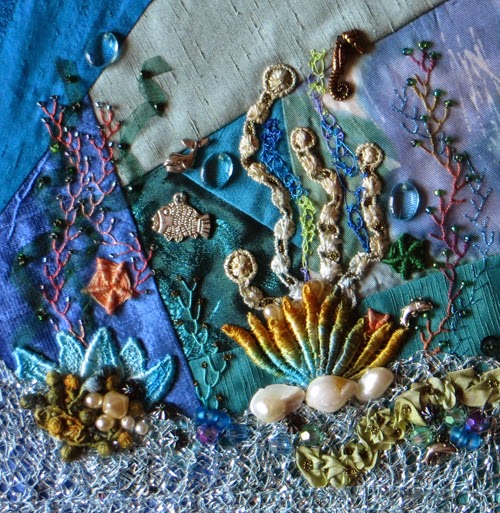 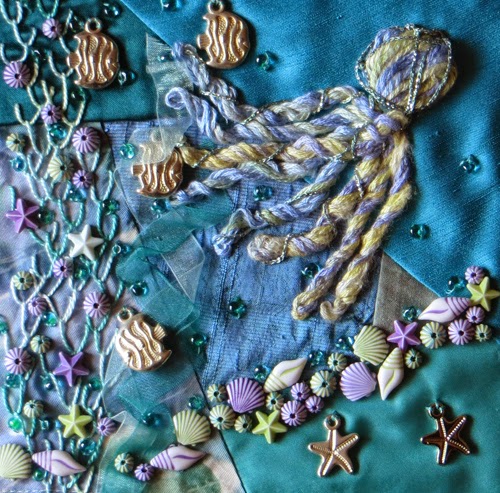 Don't they look beautiful? I am sure Alison will be pleased when her blocks finally make there way back to her.