I had my Christmas break up party with my sewing friendship group this week. Every year someone decides on a little Kris Kringle gift for us to make and share with the group.

This year we had to make a scissor fob; it took me nearly all year to get it started. I embroidered a ribbon rose onto some purple felt and beaded the edge to give it some weight. Janice got mine.


I actually embroidered the rose on both sides. A scissor fob hangs on the end of the scissor handles. It has a two-fold use; it identifies the scissors as yours plus it adds some weight to the scissors so they are more likely to fall handle first and protect the points of the scissors.

I received a lovely beaded scissor fob from Mariya.


All my commitments are over for the year and here in Australia we have our long summer holidays. I am looking forward to the break and hope to get lots of sewing done.

We had our photo with Santa as usual but this year we had a photo that included my two daughters and myself with the 3 grandchildren. I have put all the previous Santa photos on the fridge and it's lovely to see the change in them. Savannah is 5, Jack is 3 and Anna is 1. Such a special time. 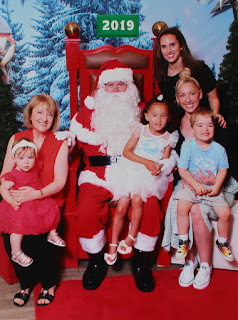 My son Cam is coming home from Japan for 10 days; it will be good to see him again especially as he has been sick with the flu recently.

Last week, I flew up to Queensland for a 5-day holiday on the Gold Coast. I went with my daughter, her husband and Savannah who is now 5 years old. Christmas is a busy time of year for my husband so he couldn't come with us.

It was so lovely and warm up there and we really made the most of our trip with activities on every day.
We went to the Brisbane Modern Art Gallery on the day we arrived because I was interested in seeing the Water exhibition. I think it was a good choice too because we hadn't adjusted to the Queensland heat yet!

The Waterhole exhibition by Chinese artist Cai Guo-Qiang lived up to its reputation. It was so large I couldn't get it all into one photo. 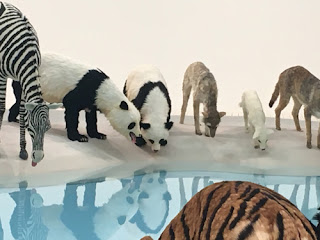 The animals were all life size and very realistic looking. The exhibition is about how important water is to the animals and they are all together with their heads bowed drinking water and not worried about fighting each other.

In another room was a huge rocky riverbed, it's not a very good photo but you get the idea of the massive scale.


The Gold Coast in Queensland is famous for its theme parks, so the next day we were off to Sea World. We had a wonderful and of course I went to the aquariums to get some coral reef inspiration. 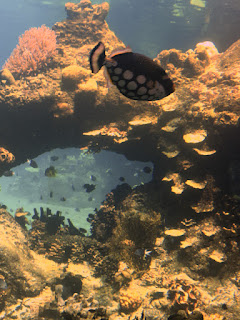 I haven't done one of those fish with the large white spots before so I'll definitely include one soon.

They had a great selection of rides for children and adults, so everyone had a fun day. We even got a photo of Savannah with a Ninja Turtle. 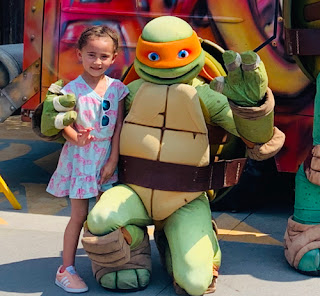 The following day we were off the Movie World and this time Savannah posed with Wonder Woman. 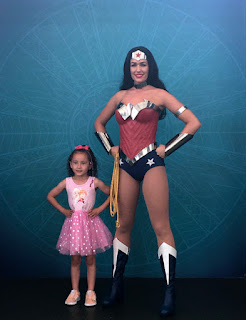 At the end of the day my daughter and her husband went off to do the scary rides and Savannah and I did the children's rides again. It was hot and the lines were long and we both had sticky hands from the fairy floss. We decided to wet our hands in the water feature. It was an area where children had put on their bathers and were running through the water. We didn't know it was there so we didn't bring any swimming costumes with us.

Savannah started running in and out of it and accidentally got a little wet. We thought it was very funny and finally I said she could go in there with her clothes on. 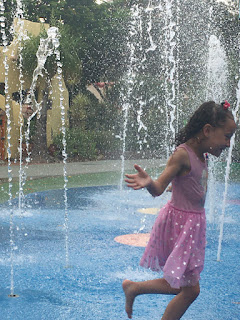 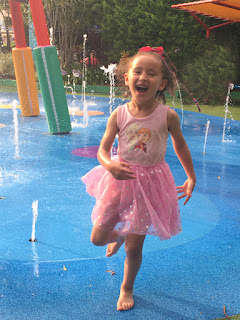 I had never seen such complete joy in a child before. I think she was extra delighted because she knew it was a bit naughty and Mum and Dad weren't around.

Of course, she was completely drenched and we had to go to the gift shop and buy her some clothes and a towel. She picked a pink Super Woman T-shirt that had a cape on the back and she wore it non- stop for the rest of the holiday. Her parents weren't cross either!!


Here we are eating ice-creams, we were a twosome from the time she woke up in the mornings. How special to have this time with Savannah. 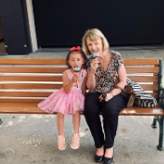 Her parents played a joke on me too. When we were at Sea World, they left Savannah and I having fun and they went on some of those scary rides. They came running back to tell me that I had to go on one of the rides because it wasn't scary and it was so much fun that they came to get me to try it. I went on with Marlon while Alison stayed with Savannah because Savannah wasn't tall enough for the ride. Needless to say, it was absolutely terrifying and I was lucky not to be flung out to my death. They laughed and laughed when we got off saying that it was the scariest ride and they played a trick on me!

Sometimes I think that they forget that I am not a spring chicken anymore. I didn't like those rides even when I was a teenager.

All too quickly the holiday came to an end but I felt lucky to be invited to come on their family holiday and it was a relaxing start to the Christmas season.

Posted by Linda Steele at Tuesday, December 17, 2019 No comments:

I have been having fun with the Angela Walters Free Motion Quilting 2018, I found it by accident one day and thought it would be a good way to keep my quilting muscles warmed up for when I need to quilt again.

The second lesson was called Continuous Curves. I marked up the squares with a purple fade away marker. 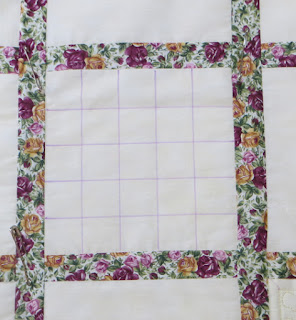 Then I stitched around the squares using a small scallop curve.


I've done this lots of time before and used to teach this pattern, but the aim is just to keep practicing, because we often don't quilt for a long time because those quilt tops take a long time to make.

Angela also suggested doing a continuous curve in a larger size. So, I marked up another square and did a different pattern. 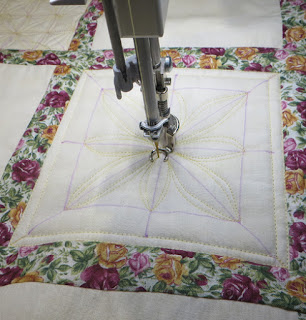 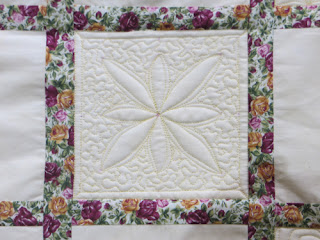 The secret to doing continuous curve designs is to keep the curves shallow.

The following lesson was called Leafy Meander. Sort of like a continuous curve but there are no grid lines to follow.


It's such a fun challenge and I love that it only takes 5 minutes to do.

On Facebook a few weeks ago someone mentioned that she was doing Angela Walters Free Motion Challenge Quilt a Long as quilting practice. I decided to look it up and came across some videos from 12 months ago. On the spur of moment, I decided to have a go.

I actually already had a panel of squares that I had sewn together about 4 years ago and had never used, so it was easy to start straight away.


Angela Walters mentioned that she was using Aurifil thread and I had a lovely pale gold that was perfect. I usually quilt with silk thread so sewing with a different thread was good practice also.


Although Angela didn't mention it, I ditch stitch around the inside of each block before I started the quilting. I wanted to do some ruler practice as well, so I used the Line Tamer ruler by Four Paws Quilting, it's such a great ruler.

The first lesson was a meander or stipple stitch, which I have done a million times before but she also mentioned echoing around the inside of the block first, so I did that for the first time.


Well, that was a good start and so much fun, because it only took about 5 minutes to do. I have some quilts that I am making at the moment that will need quilting next year, so doing some regular quilting practice might make it easier.

I have since found out that Angela Walters is doing another quilt-a-long practice at the moment, so it's not too late to join in the fun.