The Waverley Patchworkers Quilt Show is over for another year. Well, two years really because we run the show every two years but the preparation starts a year ahead.
Opening night was a great success despite the appalling weather that we had on Friday. The forecast was to have a months rain in a day. The quilters still came and were treated to a wonderful talk from Leannne Beasley, who is well known for her Leanne's House patterns and her Vingette magazine.

I was lucky enough to win the June Lyons Award which is awarded by the Quilt Show committee for the quilt they admire most that has been made by one person (ie. not commercially quilted).
The quilt I won it for was Naturally Crazy.

I was also lucky enough to win 2nd in Viewers Choice for my quilt, Holiday Waltz.

I can see that I am looking a lot more tired and weary by the end of the show when this photo was taken. Who won 1st Viewers Choice? Mariya Waters, of course. I forgot to take a photo of her quilt but the photos of all the awards and winners should be on the Waverley Patchworkers site soon.

Our wonderful raffle quilt called A William Morris Garden was won by an active member of the club, so that was nice for a change and good to see her collect her prize.
You can read all about the designer, makers and quilter of our raffle quilt by reading a previous post I have done  by clicking here

Email ThisBlogThis!Share to TwitterShare to FacebookShare to Pinterest
Labels: Exhibitions

There are so many pitfalls on the road to machine quilting your own quilts, but the number 1 mistake that people make is not using enough pins.

I always use size 2 curved safety pins. They are so much easier on your fingers and hands than the old fashioned straight pins. The container below shows my collection of pins. By the time I have finished pin basting a large quilt, this container is empty!

Make sure the quilt is completely stabilised with pins because that quilt is going to be pushed and shoved through a sewing machine and you don't want any shifting of those layers. Nothing is more depressing than finding a fold or tucks on the back of your quilt after all that work of machine quilting.


I went through my photos and found a couple of pictures that I had taken after a pin basting session.


Eastern Elements took 4 hours to baste and Holiday Waltz took 3 and a half hours.


Hello to my students at the Wonga Park Community Cottage and the Geelong Patchwork and Quilters Guild. I hope you are doing some practice. Be kind to yourself and start quilting some small items before you tackle that large quilt.

Email ThisBlogThis!Share to TwitterShare to FacebookShare to Pinterest
Labels: Classes

I started designing my own quilts in 2004. I certainly never expected to go in that direction when I first started quilting. Once I started on that road, I couldn't stop. I get so much pleasure from it.
Designing is not particularly easy for me and it takes a long time but it is so satisfying.
I never know when an idea will strike but it is often mixed up  with my life experiences somehow. We are all a product of our past. Even if we experience the same thing as a friend, our reactions to it are based in part on our life experience.

I recently read a blog post by a quilt designer, Tanya Brown who has documented her design process on her latest quilt. This is a rare pleasure. Quilt designers are usually too caught up in the trials and tribulations of designing and creating to stop and think and write about what they have done.

I don't know Tanya Brown but she was kind to me once. My quilt Crazy About Ballet was in Houston and she took a photo of it hanging there and emailed me a copy. She didn't have to do that but it warmed my heart. I have followed her blog ever since.
Here is the link to Tanya Brown's latest blog post about the beautiful art quilt that she has finished.
I hope you enjoy the sneak peek into her designing.

Email ThisBlogThis!Share to TwitterShare to FacebookShare to Pinterest
Labels: Inspiration

I am managing to keep up to date with the Crazy Quilt Journal Project (CQJP 2012). This months block is a dark red block with a snowman in the centre.

Here is the base block without the embroidery. This one is a 7" block. 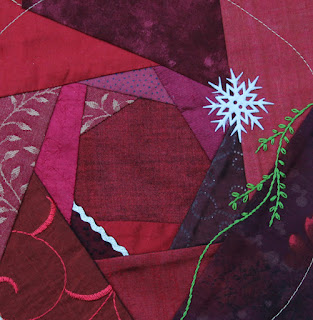 You can see that I had started the embroidery when I remembered to take a photo. I have used a mixture of silk and cotton fabric. In future I must try and remember to take a photo before I add the beads. I think that the beads really improve the block and it looks so plain without them.

I am enjoying looking at all the blocks that other people are making. Photos of blocks from all over the world have been posted on the CQJP Blog.

If you go to the CQJP Website and click on Inspiration Photos, you will find that they have given the participants their own page and you can see all their blocks that they have done so far.

I have already started my June block.

Mystery of the Stolen Quilts

17 years ago two quilts were stolen  when they had been on display for the Premiere of the film
How to Make an American Quilt. That film was made in 1995!
At the Australasian Quilt Convention recently I had the chance to speak with the President of the Western Australia Quilters Association. Two quilts were recently posted to the  guild with a letter attached. The letter said that they had been stolen a long time ago and now the person wanted to return them.
The only reason those quilts were able to be returned to the owner was because those stolen quilts had labels sewn onto the backs of them. What a happy story. The other good news is that the quilts were still in excellent condition.

I have written about the importance of quilt labels before. I suppose it's a valuable lesson to label everything that we make even if we don't think that it is very important or special. I know how difficult it is when you have worked so long and hard on a quilt and you finally finish sewing on all that binding. What an effort to make a label and sew it on.

Not only do I write my name and address and the title of the quilt and the size in inches and centimetres, I also write the year that I finished the quilt. The way time flies I would never remember when I made a quilt unless I had put a label on it.
Now, I must get on with those labels for my latest quilts. Do you label your quilts?


Florence Broadhurst was born in July 1899 in Mount Perry, Queensland and died in Sydney in October 1977 aged 78.

Florence must have been a very charismatic character who managed to continually re-invent her life. She worked very hard at being a success. From an acting and singing career in Shanghai and Singapore to running her own Dress Salon in London where she mixed in the latest social circles. In London she pretended to come from France, when she arrived back into Australia in 1954 she pretended that she was English. It made her seem more exotic and the press loved it.

Florence is best known for her wallpaper designs, her factory was in Sydney and she and her staff worked tirelessly and made sure that everyone from TV personalities to businesses owners wanted her designs.
How sad that she should be brutally murdered in her studio on 15th October 1977. People who knew her have speculated that it must have been someone that she knew. The infamous serial killer, John Glover was also a suspect, but no one has been charged and all the evidence destroyed and so there is no chance of using DNA evidence to prove who did it.
While studying Florence we all read the book by Helen O'Neil which is pictured above. After reading the book we watched the DVD called Unfolding Florence which is a quirky Australian film by Gillian Armstrong.

It was wonderful to watch the DVD because they interviewed many of the characters in the book and it was so interesting to see them speak because I felt as if I knew them.

For my little A3 sized Art quilt I used one of her most popular images called Japanese Fan. I enlarged and cropped it and called it Florence.
RIP Florence Broadhurst, I am glad to have learnt about you, but I do hate unsolved mysteries.