The Round Robin that I am participating in with the Southern Cross Crazies is almost at an end. Only one more swap and we get our original block back.

This month I have been working on Maureen G's block. I found the mustard yellow and cream colours very striking. In fact apart from being able to see other people's beautiful stitching up close, it has been a good experience to stitch with the different colour schemes.

This is what Maureen's block looked like when I received it. 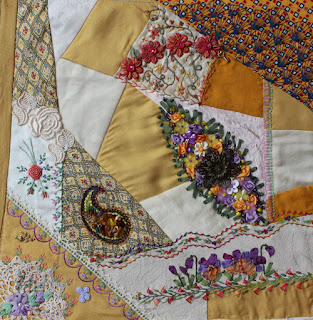 Someone in the group had gone to a lot of trouble with charms, buttons, ribbons and embroidery


The bottom left corner had some ribbon embroidery on top of a lace motif and a paisley shape filled with different kinds of beads. This is a very heavy block! 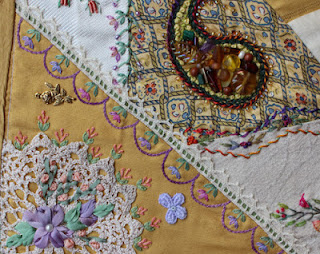 In the bottom right corner are some really beautiful ribbon embroidered pansies. I think that the variegated ribbon really helps to enliven the pansies. 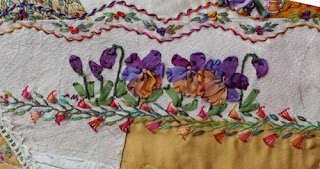 Finally the top section has some lace flowers covered with embroidery stitches and finished with a button in the centre. 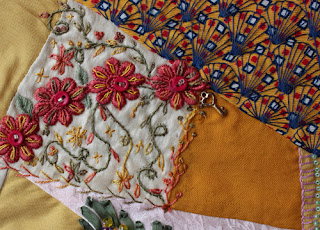 I decided to fill in the top left corner and thought I would continue with the flower theme and add some purple Irises with ribbon work as well as some seam stitching and a little spray of purple lazy daisy flowers. 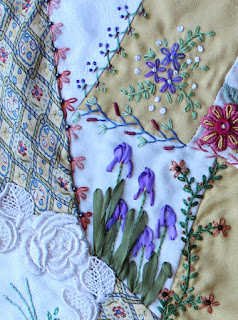 After I had taken this photo I decided to add some embroidery onto the lace motif because it seemed a bit plain without it.

This is what the block looked like when I had finished. 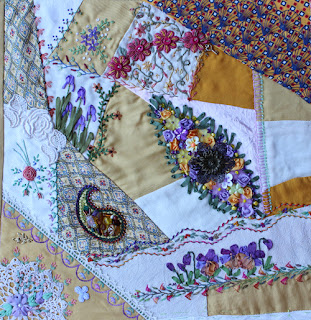 Now I have to pack it up and send it onto the next person on the list. This block is very heavy so it might cost a bit more to post. It's a very pretty block though, don't you think?

Last week we had the first meeting for the year of the Waverley Art Quilters. At our November meeting at the end of last year we were all given a brown paper bag with a variety of Indian style fabrics and were challenged to create a small quilt using the fabrics and using the theme of Bollywood.

We all received slightly different fabrics and here is a sample of some of them.

When I opened my little bag I was a bit disappointed that I didn't get any of the red fabric that some people got. Here's a photo of the fabric that I received.


We received 4 fabrics and the orange one on the right was quite wide and so I cut it in half so it gave the impression of 5 fabrics. I looked at them all over Christmas and couldn't quite decide what to do with them. They were only about 10 inches in length so none of them were long enough for a border.


I fiddled around with a few ideas and got out some of my own fabric that I could use. I had been thinking of including a dancing Bollywood lady or doing a fancy indian styled applique when finally decided on an elephant. As you can see from the photo above I was going to have a yellow elephant. Then I remembered my colour theory and knew that I had to have some light, medium and darks. I had no darks and so changed my elephant to a dark brown.

I pieced the fabrics to make a background and fused the elephant onto it. The fabric I used for the elephant tended to fray a bit and so I sewed a narrow satin stitch around his edges.

Then came the fun part, I got to decorate him with embroidery threads and beads. I added some shisha mirrors in the border on the side.


As I was sewing my quilt I started to fear that everyone else would do an elephant as well.

When we revealed our quilts there was a huge variety of ideas including dancing girls, Taj Mahal, temples and only one other elephant!

I thought I had a lot of sparkle on my quilt until I saw some of the others. My little quilt seemed quite sedate. Maybe I'll add some more bling.

This month we are studying the work of Clarice Cliff.

Quilt at the Winter School

I have quite a few teaching dates organised for this year and most are for private groups and don't have any vacancies but the class in Ballarat still has some vacancies.

In July, I am teaching at Quilt in the Winter School in Ballarat, it is  5 days of classes as well as meals and accommodation at Ballarat Grammar, which is a beautiful school.

Having a 5 day class is quite unusual for quilters but it is a much more common occurrence for textile artists. I think it is a wonderful opportunity because it is very hard to include much content in 2 day classes and virtually impossible in a one day class because hand work is so much slower than machine classes.

As well as learning all the basic crazy stitches we'll have a chance to learn the less common and more intricate stitches. I am looking forward to covering design and colour and hoping to encourage everyone to find their own artistic voice instead of having to follow patterns all the time. It will be a very exciting opportunity and I am looking forward to it.

Click on the link here to read a bit more about it. It will be a wonderful week for friends to get together but everyone will be included so don't be afraid to come on your own. Glenys Mann is organising the retreat and she is very accomplished at his sort of event.

Our Round Robin with the Southern Cross Crazies continues. We last exchanged blocks in December but were given two months to complete our embroidery because of the Christmas holiday season.

I received Patti's beautiful cream block to work on.

It is a very soft delicate looking block and I wanted to continue with that theme. It might be hard to see from the photo above but there was a lot of mauve and soft green as well as the blue of the cameo. I decided that the block needed a bit more blue to balance out the block.

I also noticed that the cameo and heart faced different directions, one was up and the other down. This is common in many crazy blocks but I didn't want to choose one direction over another.

I solved the problem by making a garland of flowers. I used a variegated blue ribbon and embroidered some spider-web roses, added some lazy daisy leaves and some blue colonial knots.
There wasn't a lot of seam room left next to the garland so I chose to do a fan of lazy daisy stitches and put some mauve colonial knots on the top of each stitch.
On the seam on the other side of the garland I put some Cretan stitches.

I put three little colonial stitches on the top in blue to help keep the eye moving over the block and on the other side I added some soft mauve lazy daisies with a little green seed bead so the embroidery will blend in with what the others have done before me.

This is what Patti's block looked like after I had finished with it.

Last week I posted the block onto the next person on the Round Robin list and I have already received my next block and it is very different to Patti's block. This Round Robin is certainly keeping me on my toes.

Only two more rounds to go and I will get my own block back. How exciting!