Insects on a Crazy Quilt

I am back to working on my crazy quilt about the Seasons and I have added some insects to the centre block. They are good to add interest in some bare spots.

I have had some little black and yellow striped beads for years and I have finally used them.

I am not sure where I bought them now; it might have been in Houston. I used a little black bead for a head and then added some legs with embroidery thread.

Finally I added some wings and my little beads became Bees.

There is a caterpillar climbing on a branch.

I always have to have some dragonflies flitting around my quilts.

I love the pop of colour that a lady- bird adds to a quilt.

This quilt is taking me ages and sometimes I wonder if I'll ever finish it.

Making Under the Sea part 2

In my last post I wrote all about how I made the fish on my quilt Under the Sea.

The quilt was supposed to be all about the different textures under water and so I made lots of little folds in the rocks at the bottom and the idea was that it would be a good place to insert all sorts of different coral.

I thought it was a good idea at the time but I don't think that I would do it again. I had to add some bits of wadding behind some of the folds so they didn't collapse and it was quite difficult to quilt.

I made lots of different types of coral using felt and embroidery thread.

Here is a photo of me trying to place the coral on the rocks into a pleasing composition. I was really starting to think that the quilt was not going to work at this stage.

I made the large red and green coral by thread painting it onto water soluble plastic.

I made the green cords using a cording foot on my sewing machine but I coloured the white cord with my fabric pen first in case there were some gaps in the thread. I used a fine white piping cord for the reeds.

As I was constructing the quilt I always imagined that those cords would go on the right side of the quilt.

In the end the cords ended up on the left side of the quilt because it was too busy over there on the right.

I made the leaves separately by thread painting them onto water soluble plastic but next time I might try and make them by attaching them to the cords as I sew them. They were quite fiddly to attach to the cords afterwards.

Here is a photo of the completed quilt.

I really enjoyed making this quilt and maybe I will make another one day. I had to make the quilt 100cm high and only 40 cm wide because of the size requirements for the contest. It would be interesting to make another one in a horizontal format.

Email ThisBlogThis!Share to TwitterShare to FacebookShare to Pinterest
Labels: Art Quilts, Under the Sea

Making Under the Sea

In the last post I wrote about my latest quilt called Under the Sea, it was a boring quilt name but I didn't have much time to think of a name, I was too focused on getting the quilt finished.

I am getting into the habit of taking progress photos as I make my quilts these days. In the past I used to try and write down what I did but I could never find where I had written my notes or I would forget to write it down altogether. My camera is always close by and it's easy to take a quick photo and then move on to the next step.

The quilt was supposed to be about texture and I had the idea of using wool for the starfish. I didn't want him to be plain orange or yellow and so I needle felted the two colours together for more interest.

Because I couldn't mark the wool, I drew a star fish shape onto tracing paper and cut out the shape. Then I added some beads to give him the bumpy look that they have.


I wasn't sure how I was going to do the Lion Fish. I got out some silk fabric and was going to applique him but the thought of all those stripes put me off. In desperation I wondered if I could draw him on a piece of white silk with some fabric marking pens.

I used two pens, one of top of the other to get the correct colour, to my surprise it worked very well. I put some fusible web behind the silk and cut carefully around the fish.

Here is a photo of the Lion Fish on the quilt, he looks so pretty but really they are poisonous and the fish try to avoid them.

I wanted to get some colour in the top part of the quilt because I knew there would be a lot of colour down the bottom with the coral. I tried some blue silk against the background and thought it would work.

I fused the blue silk fish as well. 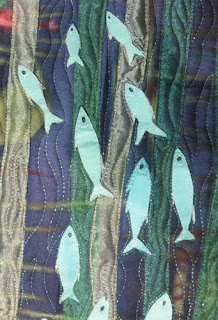 I used two colours of an orange/ yellow silk that I had hand dyed a couple of years ago for the yellow fish.

I wanted the purple fish that were behind the yellow fish to be a matte finish so they would look further back and they are actually painted interfacing.

Here's a photo of the entire quilt.

I am so glad that I took the photos to help me remember what I did.

Email ThisBlogThis!Share to TwitterShare to FacebookShare to Pinterest
Labels: Art Quilts, Under the Sea

I was absolutely thrilled to hear the news that my Under the Sea quilt had won 2nd prize in the World of Textures competition. The competition was held at the Berry Patchwork Retreat and Quilt Show, in Berry NSW, Australia.

I had known about the competition for ages and I had no inspiration and no time while minding Savannah, my little granddaughter. One day as I was watching her play with her toys I thought about creating texture with coral and using my embroidery skills from all the crazy quilting I have done over the years. Once I had the theme lots of ideas started coming to me.

I worked every spare minute. I even took my little bits of coral away with me when we went to Queensland for a week.

I didn't draw up any pattern, I just made it up as I went along. It was very free and I really enjoyed making it.

I had thought about making an Under Sea quilt before but I never got inspired enough to actually do it, although I have done some underwater crazy blocks before and always enjoyed making them.

I used many different fabrics and materials. In fact I had been collecting all sorts of fancy threads and shiny fabrics over the years to use 'one day'. That day finally came and out came the boxes, I had stuff everywhere.

I was making all sorts of different textures, none of them very realistic and not all of them very successful but I was really pushed for time and hardly had time to think.

There were times near the end that I didn't think that I would be able to pull it all together and make that coral work with one another. That's where the french knots came in very handy.

There was a size requirement of 100cm (39") high and only 40cm (16") wide, so it was a long and narrow quilt. I only just got it finished in time, I faced the quilt, photographed it and sent it off to Berry express post to get it in before the deadline.

To actually finish the quilt and get a prize for it was icing on the cake especially as I have never entered an Art Quilt competition before. I have made plenty of art quilts but never entered them anywhere.

I am still working away on my crazy quilt about the Seasons. I have nearly finished the centre and I noticed that I had embroidered 4 birds, one for each of the seasons.

In the winter section I put a Cardinal even though we don't have them in Australia, they remind me of winter. Maybe it's because I grew up with so many Northern Hemisphere Christmas scenes on cards and in books. I love their beautiful colour against the pale snowy background.

For Spring a chose a dear little Finch. I love his little white spots


In Summer I chose an Ibis wading in the water. I have a soft spot for the Ibis because every summer we were visited by an Ibis who used to eat the grass in our backyard. I haven't seen him around for a few years now.

I chose a goose for Autumn because of all the stories I read growing up about the geese flying away before winter comes.

I think it will be a while before my Seasons quilt is finished. I have more embroidery plus some applique to do before the top can be put together.