In my last post I wrote about how I decided on the final setting of my latest crazy quilt, Christmas Crazy.

Here are a few close-up photos from the quilt. I have made the photos a bit larger than usual but I cannot make them too big or else some people have too much trouble getting the blog to load onto their computers.

The Nutcracker block is a 9 inch block and is one of my favourites.
The Rocking Horse block is the only 12 inch block that I ended up putting in the quilt. I made two others that I am now making into wall hangings.
Here is a close-up photo of the sleigh from the top block.
I put some of the blocks onto a different shape because I found having the blocks all round was making the composition of the quilt more difficult.


I hope that you enjoyed looking at some of the detail of the quilt.

I have an idea for a new quilt but also have a long list of other things to do as well, including another daughter's wedding later this year and running the Waverley Patchworkers next quilt show.

There are always plenty of things to do around here!

A few people have asked me about how I designed my Christmas Crazy quilt. It was quite a saga in the end and quite a number of times I thought that I would never get this quilt finished. I never design a quilt fully from the beginning, I always have a bit of an idea in my head of what it will look like and then I start and the quilts develop as I go along. This process suits me and the design always changes as I go along but this design process also has its drawbacks as I often go through a lot of angst trying to decide on how it will all go together.
I took a number of photos as I went along, not for blogging purposes but to try and help me decide the correct path to proceed.

Here is a photo of the finished quilt. I suppose it looks a simple enough quilt but the journey to it being finished was anything but simple.

All last year I pieced 12 crazy quilt  blocks with a Christmas theme and then I had to decide how to put them into a quilt. I had made the blocks into circles because I had an idea to make them into hanging Christmas decorations. I also knew that I wanted a Christmas scene or something like that at the top but before I could design the top I had to know how wide the bottom part would be.

Before I could decide on the block placement and therefore find out how wide it would be, I had to choose a background fabric and this turned out to be much harder than I expected.  Here are a few examples of what I tried.

????
I didn't like any of the backgrounds and if you look at the side you can see that I was planning a red border. As you can see from the photo above I had so many blocks and I was finding it very hard to find a pleasing composition.
Finally I tried a mid/ dark green background fabric that I liked but I was still having trouble finding a pleasing arrangement for the blocks and I realised that if I used all of them the quilt would have been too wide. 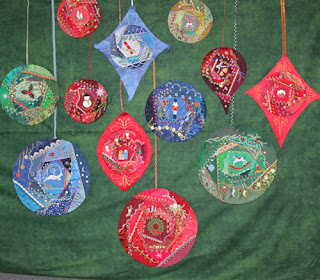 I removed three of the blocks including two of the large ones because I found they were just too big. 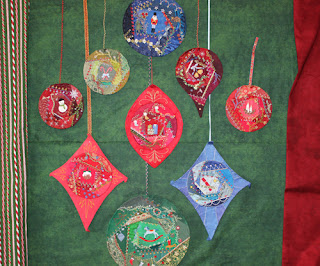 At last I had something I was happy with but you can see from the photo above that I was still thinking of having a red border . But at least I knew how wide the quilt would be and I could design the top section. You can probably also notice that I changed the shapes of some of the blocks to make them easier to place. I found it too hard to design when I had them all as circles.

I got a large piece of paper out the same width as I wanted the top section to be and drew up a Christmas scene. I wanted to keep the centre as flat as possible and sometimes  the embroidery will pull in a bit so I prepared the centre part first.

Here is the reindeer that I had fused onto the background fabric, he looks very flat without any shading or embroidery doesn't he? 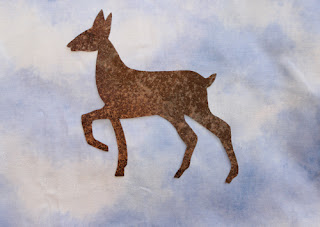 When I had finished embroidering the scene, I auditioned the fabrics for the crazy piecing around it.


At last I was thinking that this quilt could really work and this is what it looked like before I added the crazy quilting embroidery. 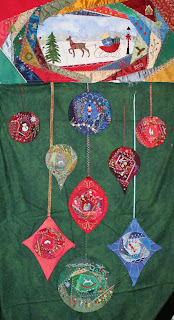 It suddenly occurred to me that the red border would be too strong for the quilt and I decided on a green border, the same as I was using for the background. I was also going to make  the hanging ribbons in the same colour as the blocks for interest but in the end I decided it would be better to have them all the same and I used a gold coloured thread and a chain stitch for hanging the blocks .

It was getting close for the deadline to enter the quilt into the Victorian Quilters Showcase and Houston and I really wanted to push myself to get it finished because I was sick of it and didn't want to spend another year on it. I had designed an applique border but I knew that it would take too long to make and in the end I just left the border plain. The applique would have looked good but I just wanted to get the quilt over and done with.

Now I had to baste and quilt it.
I could hardly believe that I had finished the quilt after so many months of work and so many hours of trying to work out how to put it together. My simple little Christmas quilt had taken 18 months to make.

There are a lot of photos in this post and so I will wait for another post to show you some close-up photos of the finished quilt.

The Waverley Art Quilters were very honoured to be asked to display our work at the recent Victorian Quilters Showcase 2013.

The Waverley Art Quilters were formed in 2007 and for the first two years we studied design and composition using the book 'Art Quilt Workbook' by Jane Davila and Elin Waterson. Since then we have been challenged every month to study an artist or technique and make a small quilt inspired by the subject. These works are not required to be quilting show standard but they are opportunities to study many varied techniques and materials on a small scale. Creating a small quilt every month can be challenging but the knowledge we have gained and the fellowship of sharing our love of art and quilting is worth it.

We set up on the day before the show opened and here we are looking very glamorous in our safety vests.

We tried to have one of our members sitting with our quilts at all times to answer any questions and to look after our quilts.


Here is a photo of me in front of our display.
﻿﻿


We had 10 different subjects on display and I'll show you a few photographs.

We had so many wonderful compliments and I would like to thank those of you who came along to see our quilts.

I felt a bit sad when we had to pack them up on Sunday night.