Last month our topic for the Waverley Art Quilters was Maps.

I struggled with this at first as I was looking at maps of my suburb but it wasn't inspiring me and then I thought about doing a map of the places where I've lived but still I didn't feel any enthusiasm. I started to wonder how I could do a map that tied in with my coral reef series and suddenly I felt a stirring of interest. I was Googling maps of the Great Barrier Reef when I found an article and illustration of where the coral bleaching was occurring up in Queensland.

Apart from being dismayed at the large bleaching area I knew I had found an idea for my map challenge.

Here is the first layer of sun printing. I used a black Sun dye called Currawong. 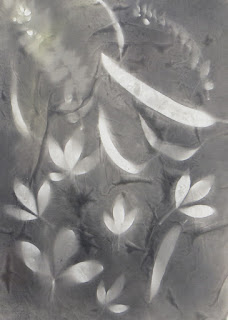 When it was dry, I heat set it with the iron and sun dyed a second layer with magenta and orange. 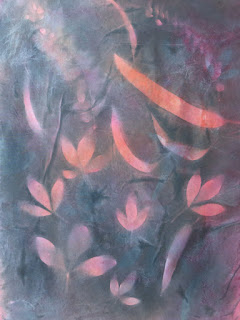 That made an interesting fabric but would have been too distracting and obvious if I used it as it was, so I cut it up into squares and rectangles and pieced it together. 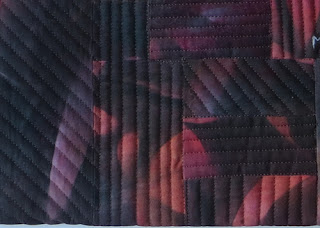 That made it more interesting.

I painted some Lutradur, which is a polyester cross between fabric and paper, but it is more fabric like and takes paint very easily and doesn't fray. I wish I had taken more photos but I was rushing to get this finished before AQC.

I left some Lutradur white and painted another piece two shades of orange to represent how good or bad the bleaching is. 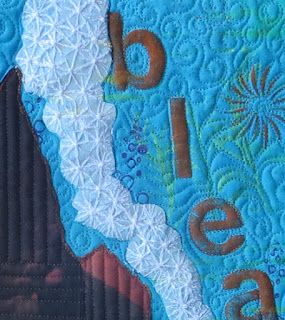 Over the top of the Lutradur I free motion embroidered some star shapes to look like coral.

Finally I added some stamping and thermofax screens with some fabric paint.


You can see how badly the coral bleaching is in the north of Queensland and down in the south where the temperatures are a bit cooler there is no bleaching.

It is very distressing when I see how beautiful the coral reefs looked 20 years ago compared to what they look like now.

I can't think of what to call this little A3 quilt, Bleaching Map doesn't seem very creative!!

I have well and truly recovered from the quilt convention but it took a few days, I really should learn to pace myself a bit more.

I took so many photos of the quilts but I will just show the ones that particularly caught my eye.

I loved Delightful Daisies by Bernadine Hine, she painted the quilt and it really glowed.

I also loved this heron quilt.


There was a display of 12 quilts by Jo Wearing, they were all big quilts and the patterns were designed by Judy Niemeyer, my favourite one was Paradise in Blooms


There were 3 quilts called Royals by Sarah Fraser, they made a striking display.

They look like photos but I took a close up of Lady Diana's eye so you can see how it's made of squares of fabric.

I met Carolyn Sullivan a quilter from New South Wales who had a retrospective of her work, she usually works in earthy tones with a lot of hand stitching but recently she has done some bright, graphic work that really appealed to me. I love the texture she achieved in the background.


There was also a huge display of work by a quilter from the UK named Gillian Travis. I really liked the screen printing and stamping that she has done to add detail to her work. Gillian was also a tutor while she was here.


Another tutor was Meri Vahl from the USA, I went to her lecture and it was very interesting. She has won the Best of the World quilt 2 or 3 times and I never appreciated how good her quilts were from photos. They are fantastic in person.


Now look at the wonderful detail


There was also a SAQA exhibition called Turmoil and Tranquility and two of my favourites were from Suzan Engler and Donna Deaver.

The following quilt looks as if the middle square is sitting forward but the quilt was completely flat, it was all done with clever shading.


I have always admired photos of Donna Deaver's sea quilts and was glad to see one up close at last.

Even looking at her quilt up close, I still don't know how she achieves such wonderful movement in the sea.

So that's AQC over for another year, I feel so lucky to have it held in Melbourne so I can go every year. I suppose that's how the quilters who live in Houston must feel.

AQC (Australasian Quilt Convention) is over for another year. It was very successful with crowd numbers up and many saying that the quilt displays were the best ever.

It started with a cocktail party which was a great way to have fun after a tiring day of setting up the quilts. Here I am meeting up with friends at the cocktail party.


The winner of the Borders and Bridges challenge was announced and it was won by my friend
Sue de Vanny with her quilt Bordering Extinction.

Here is a detail photo, she gets such realistic and amazing detail in her work.


I had another friend in the competition with her beautiful machine quilting.


I loved putting faces to names at the show.

Another quilt that I liked was by Marie Mitchell.


There were so many wonderful quilts in the challenge and they were so different, luckily they will be travelling around Australia to all the quilt shows so they can be seen by many people.

At the entrance to the quilt show was the Cherrywood Challenge 2017, they had so many entries for the Van Gogh challenge that they divided them up into 3 different exhibitions, we had the Dutch display. Cherrywood fabrics are an American company that sell hand dyed fabrics and they seem so saturated and rich.


I took photos of many of the quilts but I noticed a crazy patchwork one and so chose that one to show.

I decided to buy the book which has all three exhibitions in it. 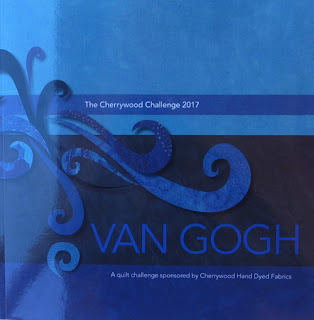 I liked the book because it had close up details of all the quilts as well.


On Friday I spent the day in the classroom being a class helper for Denise Griffiths who was teaching a three day flower class.


I didn't go to the Gala Dinner but my friend Sugy Kim won Best of Australia with Colourful Retina.


It was a very busy show for me especially seeing it was my first as the coordinator. It all went really well and I enjoyed catching up with friends from all over Australia. I spent a lot of time talking and meeting people as well as having meetings with sponsors so I didn't buy as much as I was planning to but I really wanted some Magnifico thread by Superior and so I bought a few colours. Hopefully they will work well in my machine.

I took lots of photos and there was a good mix of art and traditional quilts but they will have to wait for the next post.

Email ThisBlogThis!Share to TwitterShare to FacebookShare to Pinterest
Labels: AQC

The Australasian Quilt Convention or AQC for short begins on Thursday and it looks as if it is going to be just as wonderful as always. If you click on the link you can get a sneak peak of the wonderful quilts that will be displayed.

I was lucky enough to have a quilt in the final of the Bridges and Borders exhibition. I called it Mangrove Nursery and it is about how the mangrove roots form a bridge shape and create a border that stops the large fish from entering allowing the small fish a chance to grow.


It was the first time I have entered the AQC challenge and was thrilled to be accepted because I know they get a large number of entries.

Another quilt of mine called The Bleaching will also be on display. 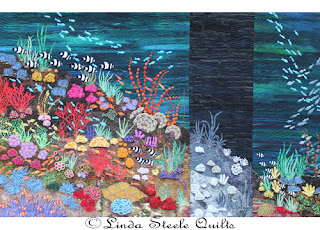 I love AQC because quilters from all over Australia gather and we see get to see some of the best quilts from around the world. This year there are art quilts from SAQA, the modern quilts from
Quilt Con and the Van Gogh quilts from the Cherrywood challenge as well as many others.

Of course there are all the shops with all that merchandise to tempt us as well.

I will be there every day and hope to catch up with many friends over the four days.

AQC is held at the beautiful Royal Exhibition building in Carlton Gardens Thursday to Sunday 10am to 4.30pm.