I was very honoured to once again be invited to make a small quilt for the Houston Silent Auction this year. This is a fund raising venture to help run the wonderful Houston Quilt Show.

Seeing as I had a couple of blocks left over from my Christmas quilt, I decided to use one of them. I used a red 12" block and put a border and some embroidery around it. 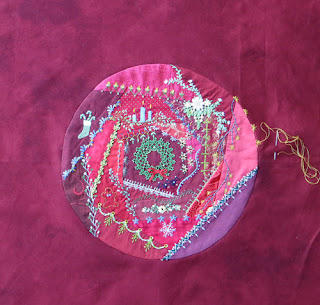 Before I added the red fabric border I realised that I hadn't washed the red fabric. I hesitated at first because I wanted to get straight on with the quilt. It is a wall hanging and not meant to be washed but it is for someone else and you never know what they will do with it. I had the bad experience once in my early quilting days when I put a quilt on the wall and the blue backing fabric left a blue imprint on the wall!!

After I washed the fabric I was glad that I did because a lot of red rinsed out of the fabric. 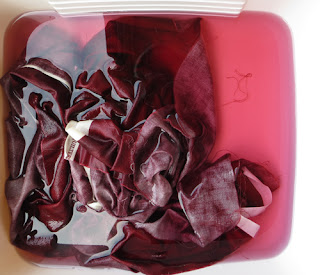 Here is the wall hanging finished but before I had added the quilting. I used a chain stitch in gold coloured DMC to make a square around the centre and then wove a stem stitch vine over the square and added some lazy daisy leaves and some little lazy daisy flowers.

Every quilt always looks so much better quilted, so here it is quilted. I was quite proud of myself because these feathers were sewn freehand without any marking, although I did use the embroidery as a guide for the feathers.

Here are some close-ups of the embroidery. 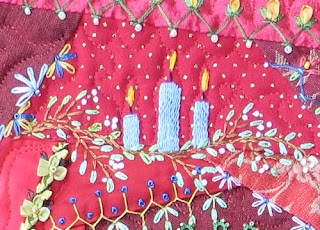 Here is a close-up of the quilting. 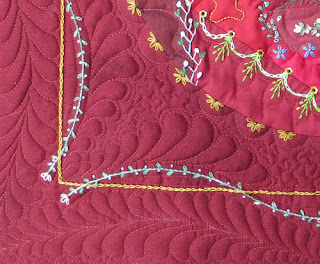 I hope some people bid on my quilt and they raise a lot of money from all the quilts. I am always happy to donate to the Houston Quilt Show because it is so well run and Australian quilters are made to feel so welcome over there.

My Christmas Quilt was juried into Houston this year and it is such an honour to be accepted. I already know that I missed out on a prize but I cannot be too disappointed because I know the jaw-dropping standard of the quilts and the ones that have received the prizes must be wonderful. All will be revealed in early November.

Every so often I get the urge to do some fabric dyeing. It always takes much longer than I think it will but there is something very satisfying in creating your own fabrics.

Here is what I ended up with after two days of dyeing, rinsing and ironing. 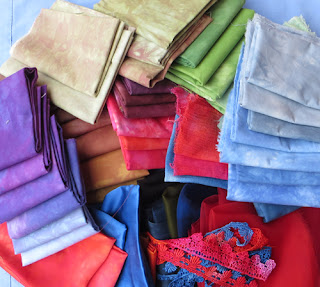 Here is a photo of my containers all filled with different dye combinations and fabric. 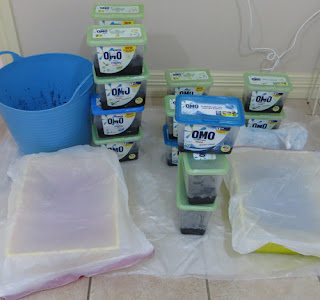 In the past I have always dyed fat quarters but this time I tore 12" strips by the width of the fabric. I used Procion dyes in blue, yellow, red and black. Actually I had two shades of each colour, a warm and a cool.

This time I was trying different combinations to get landscape colours and I was very happy with the results.


While I had my dyes out I thought I would also dye some silk, cheesecloth, organza and lace
I love the vibrant colour of the lace. I didn't really want the silk organza to be quite so dark but I haven't done any organza dyeing for a couple of years and I forgot that it doesn't need to be in the dye pot for very long.
I love the way the hand dyed silk glows, sometimes I wish I could sew with silk all the time.

At the last minute I grabbed a fat quarter of fabric and did a little shibori dyeing. I wrap it around a plastic pipe and scrunch it down to get the effect. One day, I'll take a photo of me doing it. It's not very well done because I did it so quickly at the end of the day but I am sure it could be put to use in a landscape.

I have packed all my dyeing equipment away now and I don't know when I will dye again, but it is a lot of fun.

I think that you can guess that I am planning on doing some landscape quilts in the next twelve months. So much to do, so little time!!

Last month the Waverley Art Quilters were studying the Brushmen of the Bush. I had never heard of them before but they were suggested by one of our members a couple of years ago.

The Brushmen of the Bush were a group of established Australian artists who decided to stage some exhibitions together to raise money for charity between 1973 and 1989. Their simple idea was very successful and when the Women's Weekly magazine did an article about them, the journalist named Lorraine Hickman gave them the name of Brushmen of the Bush. They liked it so much that they asked her permission to use it.

The artists were Eric Minchin, Jack Absalom, Hugh Schulz, John Pickup and Pro Hart. They all painted scenes of outback Australia and in particular Broken Hill. In fact Broken Hill is a thriving art community because of  their success. They raised more than one and a half million dollars for charity.

I decided to do a big gum tree and set it on a red foreground to resemble the red dirt of outback Australia. I quilted their names into the sky but it is probably too hard to see in the photo.


I liked the tree but I felt that it didn't really stretch me at all because I have done trees like that before. Why not try another one?

This time I used a painting by Jack Absalom as my inspiration and I wanted to try a few new techniques.

I had been buying various organza fabrics and now was the time to try them. I placed a piece of cream fabric down that was the size of the finished quilt. Over the top I started cutting out pieces of organza to resemble a sky. For the ground I placed a yellow/orange cotton fabric and then started layering pieces of wool and hand dyed scrim that I had in my stash. 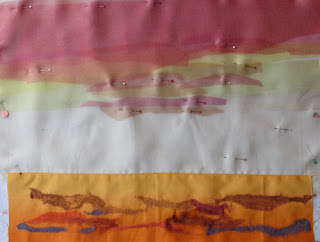 I didn't want to use any fusible web and I wasn't sure about the organza fraying so I placed a pale yellow organza over the entire sky and I held the wool and scrim in place with some jabs of my felting needles.

Next I free motion thread- painted a tree and some smaller trees and undergrowth. I used some wool for the leaves Then I added some batting and a backing and quilted it. I quilted the sky quite closely in horizontal rows because I had seen it done that way in a couple of books. It's quite effective but would be pretty boring to do on a big quilt.

I am moderately happy with the result but I am very happy that I had a chance to try out some new things. I am quite pleased that I managed to not use any fusible web. Not that I have anything against it really, it was just a challenge that I set myself.

That is the beauty of being in this group. I learn about different artists and techniques and I get to experiment with different materials in a small quilt that doesn't take very much time.

This month we are experimenting with screen printing and stencils.

I received another charm block in the post and also enclosed was another little charm for the bracelet. 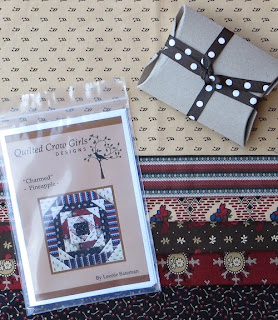 I get the pattern, fabric and charm sent from the Quilted Crow Girls every two months. I signed up on a whim last year and it has been a bit of fun. The fabrics are very traditional, maybe a civil war style and I don't have fabrics like that in my stash. The blocks are traditional patterns and I haven't done traditional piecing for years and it is nice to revisit the techniques.

They send a foundation pattern in the kit and this makes it so easy to open it up and start sewing! This time it was the pineapple block and it took a lot longer than all the other blocks so far. I hope that they aren't getting more difficult each time!

Even when foundation piecing you have to be very accurate when sewing the block because just a slight deviation from the line and your points are off.


The pineapple block has always been one of my favourites and years ago I had been planning on making an entire quilt with the block. I really like the striped fabric on the outside, it gives a lot of interest to the block.
The block is 6" finished.