Textiles from around the world have been inspiring artists and designers for years. Last month while studying the book Connecting Design to Stitch by Sandra Meech the Waverley Art Quilters were finding images of Textile inspiration.

There are many books devoted to Textile Inspiration and Dover Books have a huge list of titles that are copyright free. I have a few of them, including this one about Indian Designs. 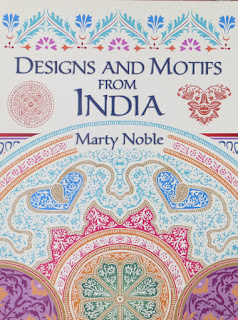 Although I have quite a few of these books, I don't think I have actually used any of the motifs but they are a good starting point when you are gathering ideas for a quilt.

I was looking around my house for some textile ideas and realised that most of the textiles I have are quite traditional.

We are gradually repainting our house and this wallpaper will be taken down in the next couple of years.

I am not sure if the textiles around my home are very inspirational for an art quilt but I can see their value for an applique or quilting design.

Michele Hill has made many quilts inspired by William Morris Textiles and many of today's quilters get their inspiration from vintage quilts.

I looked through the quilts that I have already made and only one has been inspired by a textile and that is the small quilt I made inspired by Wallpaper Designer, Florence Broadhurst. You can see the blog post I made about this quilt here.

The next topic we have to study is Fashion. I think I will have to look further afield than my own wardrobe to find anything for that subject!

Bye for now,
Linda
Posted by Linda Steele at Tuesday, August 25, 2015 No comments:

Email ThisBlogThis!Share to TwitterShare to FacebookShare to Pinterest
Labels: Connecting Design to Stitch

Frixion pens have been available for a few years now and many quilters love them as a marking tool. I did some testing back in 2013 and found that I couldn't remove the marks completely and so I have always resisted using them.

I thought that it was time that I retested them just to make sure. They are available at newsagents and supermarkets everywhere and marketed as an erasable pen. You just need to iron away the pen lines.

I drew a heart on some fabric in red and black.

The marks ironed away easily, it seems too good to be true.

The next time I tried putting the fabric in the fridge and the hearts did not come back and I wondered if the pen lines had gone at last so I put them in the freezer again and once again those marks came back,

I didn't try to remove the marks anymore after three attempts they always came back when exposed to extreme cold.

Then I remembered that a favourite marking tool of mine is the white Clover iron away marking pen. I wondered if those marks came back in the freezer.

I drew a heart on the dark fabric with the Clover marking pen.

I let the mark sit for a few hours to set and then I ironed it away and placed it in the freezer.
The heart drawn with the Clover marking pen did not re appear.

I suppose the difference with the two pens is that the Clover pen was developed for using on fabric but the Frixion pen was not made for fabric use.

It's a disappointing result with the Frixion pens because they give such a fine, clear mark to use as a quilting line.

Now I know that I never put my quilts in the freezer but I do send my quilts away in planes where they get very cold in the luggage storage and I would hate for my quilt to arrive for a competition or exhibition and find out that those marks have re appeared.
Saying that, several well-known quilters have used the pens and posted them overseas and not had a problem. The trouble is that those marks are still there in the quilt, they have not gone. It makes me wary of using them.

Just after I had finished my testing I saw an article done by Jenny K Lyon, who had done her own testing and then went a step further and contacted the makers of Frixion Pens who told her that the pens were not developed to be used on fabric. Click here to see the article.

Wouldn't it be wonderful if the Frixion pen people developed a pen that could be used on fabric?

The results are out for the World Quilt Show and 5 Australians have won awards this year which is a good result for our small population.

I have seen two of the quilts in person and they are both wonderful.

Bye for now,
Linda
Posted by Linda Steele at Friday, August 14, 2015 No comments:

Last year I bought a couple of craft cases that have a plain top and the idea is that you can cover them with fabric or patchwork to make them unique to you. Lots of patchwork shops sell them and I think that they may be a Clover product.
I have seen one done with a clam shell pattern that looked beautiful but I don't do that sort of patchwork. Crazy Patchwork is more my style and so I made up a base of green fabrics to tone in with the case.

After I had completed the crazy patchwork, I used freezer paper as a template for the size of the top of the case and ironed under the edges.

I bought some Clover curved needles to sew the crazy patchwork to the top of the case.

The curved needles were a little fiddly to use but they actually worked very well.

Here are a couple of close up photos of the top. 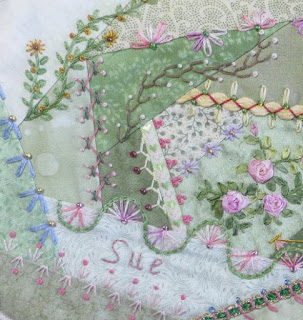 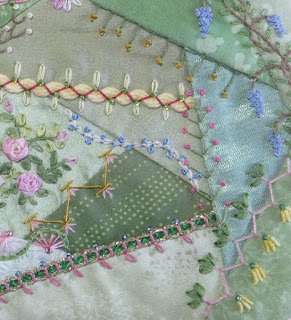 You may have noticed that the name I have embroidered on the top is not mine, that is because I made it for a dear friend of mine for her birthday. Sue actually changed my life by introducing me to patchwork all those years ago. 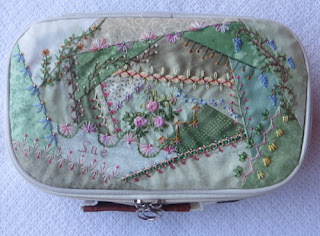 Who knows if I'll ever get around to making one for myself? Life is still busy here while I am minding my granddaughter Savannah during the week. She is a delight but very tiring and loves helping me around the house! It's hard to believe that she is now nine months old.

I belong to the Waverley Art Quilters and this year we are studying the book Connecting Design to Stitch by Sandra Meech.

This year we are concentrating on researching many different topics that might inspire our quilts in the future; last month we were researching Household Objects.

Many people lament that they don't live in an exotic location or don't go on exciting holidays like others do to get their inspiration. Sometimes the inspiration is right under our noses, around our house, in the next room. Inspiration can be found in furniture, plates, bowls, baskets, jewelry or vases. You could use a detail of an object, a cropped portion of an object or even the entire object set up as a still life.

I have made some small art quilts using Household Objects as inspiration in the past.

In 2013 I set up a chair and rested a guitar next to it, after I had taken a photo; I cropped it and then simplified it.

In 2013, we studied ceramic artist Clarice Cliff and I placed a vase and jug together and created a quilt.

In 2011 I used an even simpler household object as inspiration when I used a cup of tea as an image.

I don't think that you can get anything  simpler than that.
So really we have no excuse and need to start looking at our surroundings to be inspired and know that the quilt we make will hold a special meaning to us.

I have many beautiful plates around my home that are sure to be a starting point for a quilt someday.