I have been participating in my first ever Round Robin with Southern Cross Crazy Quilters. We are up to round 3 and I have Arlene's block to work on.


Arlene has specified a Christmas theme and we can only use blue, white or silver. I actually found this more of a challenge than I thought I would, especially as some of her fabrics are patterned which makes it difficult for the stitching to show if you are not using contrast colours. You can see what the other participants have done so far in the picture above.

I decided to add some Christmas bells, embroidered in satin stitch in the centre. The bow that the bells are hanging from was embroidered in stem stitch. On one of the seams I added some stars in dark blue and silver and then on the white velvet fabric, I added some feather stitch.


I am enjoying being part of the Round Robin, everyone has a different style and you rarely get a chance to see other peoples work close up.

Bye for now,
Linda
Posted by Linda Steele at Tuesday, October 30, 2012 No comments:

I have been participating all year in the Crazy Quilt Journal Project 2012(CQJP 2012). Every month people from all over the world have been making a crazy block every month and posting it on the CQJP Blog.

I decided to have a theme for my blocks and my theme is Christmas. It's now October and Christmas decorations have started to appear in the shops. I hardly batted an eye when I saw them because I have been thinking about Christmas all year!

My October block is green and is 12" wide. I embroidered the rocking horse in the centre with stem stitch.


I did the candle in stem stitch as well. I found some fun little buttons for an embellishment and put some lazy daisies (detached chains) around them to look like flowers. 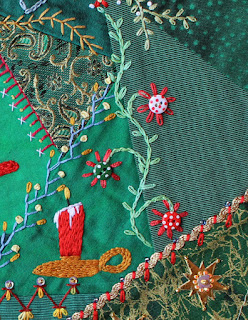 I put some stockings hanging from a vine with some spider roses in 4mm red ribbon. 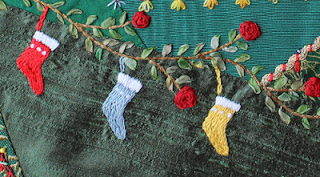 This is what the base block looked like before I added the embroidery. 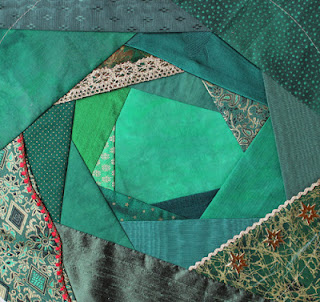 It's hard to believe that there are only 2 more blocks to go.

Posted by Linda Steele at Tuesday, October 23, 2012 No comments:

The Waverley Art Quilters have been studying Rosalie Gascoigne, an  artist who was born in New Zealand in 1917 and died in Canberra, Australia in 1999 of a heart attack. She was 82 when she died.

She married an astronomer, Ben Gascoigne and they lived at the isolated Mount Stromolo Space Centre in Canberra, Australia. Rosalie raised three children but was lonely and felt that she had nothing in common with the other women. After becoming adept at Ikebana (Japanese flower arranging), she started collecting scrap iron and wooden boxes and would pull them apart and rearrange them.
Text became very important to her work and she would use the text from the sides of packing crates and put them in a grid format that looked very similar to a pieced quilt. She also collected old lino and toys and rearranged them to form sculptures.

Rosalie Gascoigne's unusual work was discovered by the  National Gallery of Australia and she had her first exhibition at the age of 57. Her work represented Australia at the Venice Biennale in 1982 and she was awarded an Order of Australia in 1994 for her services to art, particularly sculpture.

After we have finished studying an artist we make an A3 sized quilt inspired by the artist. I decided to use black text on yellow fabric because a lot of her work looked that way.

I wanted to use TAP (Transfer Artist Paper) to apply the lettering to some yellow fabric but I only had one sheet left. I needed another sheet of lettering so I printed some words onto white printable fabric and had to paint it yellow. I had to reverse the lettering for the TAP paper. I got an assortment of yellow fabrics and used some Distress Ink to mark them and make them look a bit dirty.

I had trouble getting a really clear print using the TAP (Transfer Artist Paper), even though I used a hot, dry iron. It didn't matter for this because a messy, worn look suited the effect I wanted. I have used it before with greater success but I suspect my new iron doesn't get as hot as my previous iron.

After I had printed the lettering onto Printable fabric, I painted the white fabric with various yellow fabric paints. To get the lettering, I wrote words associated with art and quilting.


I cut all the prepared fabric into squares and rectangles and sewed them together in a grid format.

Here is my little tribute to Rosalie Gascoigne.
That was our last official meeting of the Waverley Art Quilters for the year. Next month we are having our end of year dinner at a restaurant and we won't meet again until February 2013. It sounds like a long time but I bet the time goes quickly.

This week I've been doing a bit of lace dyeing. I only needed to dye one lace motif for a new crazy block that I've started, but one thing led to another and before I knew it, I was testing all the colours that I had. A simple task became a major event! 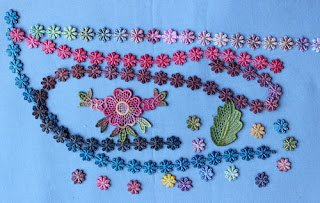 I have two brands of lace dye/paint that I use. The one I tend to use the most is Ozecraft Dye. The people that sell this brand always have a stand at the major quilt shows around Australia. I think that there are 33 colours in the range and I have 15 of them. The colours are nice and soft straight from the bottle but to be colourfast you have to dry them with a hairdryer or microwave.
I found out the hard way that they are not colourfast if you air dry them and then heat set with an iron.

The other brand I have is from Sara's Bloom, I bought this set of dyes when I was at the International Quilt Festival in Houston in 2010. This is a set of 7 colours and you can mix them together to make a huge variety of other colours. This was the main reason that I hadn't used them much because I wasn't sure what colours I could make.
On the spur of the moment I decided to use the colours and mix them together and make a colour chart. They make some beautiful colours and the advantage to these dyes are that they are colourfast and permanent without any heat setting.

When I dye a lace motif and I am trying to be particular where I place the colours, I pin the motif to a piece of styrofoam. 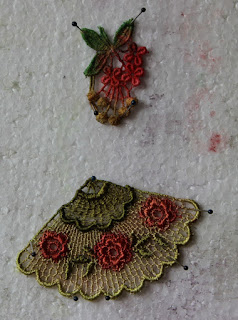 That was the end of my dye painting for now but I am much better prepared for next time.

Last month our topic at the Waverley Art Quilters was Nature Inspired. We decided to narrow the field a bit and we had to use a close up (cropped) image or a distance shot (bird's eye view)

We also decided to stay away from leaves because earlier this year our topic had been Inspired by Image and the photo we used was of red leaves. You can see the post about it here.

I looked through the photos that I had on the computer and decided to do a viola. I cropped the image in Photoshop and came up with this. 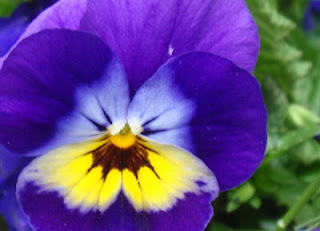 I printed out the photo and traced the various colour divisions. I began to feel that I had cropped the photo  bit too closely and on the spur of the moment I free hand drew the bottom petal onto the pattern I had made.

I got out my batik fabrics in purples and yellows and built the flower in fabric using fusible web behind the fabric. I really enjoyed the process and loved seeing the flower emerge.

I quilted the viola in thread that matched the fabrics and then instead of binding, I faced the quilt top because I wanted the bottom petal to be hanging down underneath the quilt.


The quilt is A3 sized plus the bottom petal and I found it a very enjoyable quilt to make.

This month we are studying an Australian artist named Rosalie Gascoigne and after thinking about it for about three weeks I have finally decided what to do. I had better get started on it because we have our meeting next week!