After months of planning I am finally leaving on the cruise to New Zealand. I will be gone for two weeks and will be teaching crazy patchwork for five of those days.

I will write all about the cruise when I get home at the end of February.

Meanwhile I just remembered that I did a block about New Zealand in my quilt Naturally Crazy, before I even knew about the cruise.

I was invited to film another episode for the TV show Susan is Craft. The show is on Channel 31, one of the free to air digital, community TV channels here in Australia. This month they are filming series 6, the last show that I did was series 2.

Here is a photo of myself and the host Susan Francis.
The air- conditioning wasn't working in the studio and it was so hot under the lights with the stress of three large cameras filming your every move and stutter! I think it was about 40degrees Celsius (Over 100F) outside, so it was very hot.
When I was demonstrating the hand stitching my fingers were slipping on the needle I was so hot and perspiring.

Here is a photo of the set and the cameras.

From the look of the photo I must have been getting ready to demonstrate the stitching on the motifs. 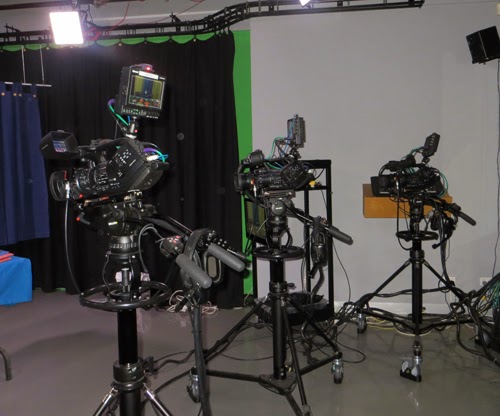 There are three cameras now, when I filmed the series two episode there were only two.

Look at the detail on those cameras; it makes my digital SLR look like child's play.

﻿ In the third section of the show I was saying how I use all different methods to make the motifs on my quilts.

﻿﻿﻿
I also showed fusible applique and outline stitching on motifs.

The filming went well and I had no trouble filling in the time.

When I had finished they asked me if I would film another segment; they wanted me to interview the host Susan. I found this much more difficult because I am used to talking about myself and my work.

I wish that I had more time to prepare questions and go through it with Susan before we started to film. I had an ear-piece in my ear so I was listening to the producer prompting me as well as listening to Susan's answers! Who knows what it ended up like, they might not even use it.

They said that the series would be shown in March and they would let me know the dates. So I'll let everyone else know when it's on. They think that the show has been sold to Cable TV in America as well.

If you miss a show there is a chance to watch it on the computer on Catch up TV.

Susan also runs a shop in Moonee Ponds, Victoria  and has a online shop called Craftgate and she is doing very well with sales and is running classes, including beginner classes.

Susan is working very hard to have a successful business and I wish her all the success in the world.

Preparing for the Cruise

The cruise is fast approaching, this time next week we will be leaving. It has taken me three solid weeks to get the kits together. I can relax a bit now that it is done but it still hasn't hit me that I am actually going. My husband is coming as well even though I will be teaching. I only teach for five of the fourteen days and the rest of the time I am free.

Here are some photos of the preparations.


The photo above is only a fraction of the thread that I had to get, because I had to supply thread for 60 kits.

I dyed metres of silk ribbon for the block holder and then I had to rinse and iron it all.
After I had printed out the patterns I had to be quite methodical in sorting out the pages.

It was a relief when it was finally done; I just hope that I haven't forgotten anything. We can't run to a patchwork shop for supplies on a cruise ship!

The cruise starts in Sydney and we are cruising to New Zealand, stopping in Auckland, Tauranga, Napier, Wellington and Dunedin as well as cruising though Dusky, Doubtful and Milford Sound, lastly we have a day in Hobart and then back to Sydney.

Some days we have a half day in a port and other times we have a full day. Are there any places that I really must see while we are there?

My husband and I haven't been away for this long since 1980, I suppose the house and rest of the family will survive!

The cruise sounds very luxurious and it seems like it's a travelling mini city and there are various shows every night to entertain us after dinner.

Will we love it?
Will we get seasick?
Will my students' revolt?

Only time will tell. We leave on the 13th Feb and come home on the 27th Feb. There goes February!
I'll report back after the cruise and tell you all about it.

My daughter Alison got married just before Christmas and the professional photos have arrived. Some people wanted to see a photo of me at the wedding so I just thought I would post a couple more wedding photos.

Here is my family, my very supportive husband and four beautiful children.

You can see that I wore a white dress with black lace and a black satin jacket.

I will post a couple more photos of Alison so you can see the beautiful dress that she wore. She's always been an old fashioned girl and wanted to be a traditional bride. She didn't wear a pair of jeans until she was 12 years old; it was only pretty dresses for her.

﻿﻿   I won't bore you with anymore photos but it was a beautiful wedding and we are very proud of her. There are some more photos in the post I wrote on 8th January.

It has been a couple of busy years for me with both daughters getting married and after the cruise later this month I am looking forward to life slowing down a little and I have plans to start a new quilt at last!