The Edgar Degas exhibition has been on all winter at the NGV (National Gallery of Victoria). The Waverley Art Quilters thought that this was a good opportunity to learn more about Degas and make a quilt inspired by his work or technique.

Degas was born on the 19th July 1834 into a wealthy banking family. He decided to abandon Law school and attended the Beaux-Arts school in 1855. He believed that drawing was the foundation of a good painting.


He studied the old masters but soon realised that they were out of date and started befriending his contemporaries like Courbet and Manet who believed that art should reflect real life. Consequently Degas exhibited in every Impressionist Exhibition except for 1882.

Degas would always carry a sketchbook to capture modern day scenes and would frequent cafes and music halls for inspiration.

Degas is famous for capturing a person or animal in unusual angles, this was something new back then. He was also an enthusiastic photographer which helped him examine the movements of racehorses.

Many Degas paintings depict naked women going about their everyday tasks like washing or combing their hair. He is also well-known for his ballet portraits.

Degas did not need money and so he preferred to keep his paintings, this meant that his paintings became very valuable because they were rarely for sale.
Towards the end of his life he started to lose his eyesight and became more comfortable with sculpture until he stopped work altogether in 1908.

He was known to be unfriendly and disagreeable and died on the 27th September 1917, famous in his own lifetime.

I decided to keep with my underwater theme even when being inspired by Degas! From a distance his ballerina paintings look pretty but when you go closer the faces look contorted and a bit ugly. Degas wanted to paint ballerinas at work when they were tired or stretching.

The Leafy Sea Dragon came to my mind because although they can look so pretty and ethereal when you look closer they can be a bit ugly.

Degas used oil pastels and I had some fabrics that looked a bit softer and more pastel-like that were perfect for my quilt.

Bye for now,
Linda
Posted by Linda Steele at Tuesday, September 27, 2016 No comments:

Every year for a few years now I have been invited to donate a quilt to the Houston Quilt Show Silent Auction. I try to make one every year as it's an honour to be asked and I am happy to support such a wonderful organisation.

I often make a little quilt that is similar to the one I have in the show but this year I wanted to keep with my Underwater theme. I called my quilt The Reef and it's 16 1/2" high and 11" wide.

I had to be quick this year as I knew I had a little grandchild on the way so I didn't take many progress photos.

Here is the quilt top before I added any stitching.

I remember adding a bit of paint to the background fabric because it had some sections that were too light and were a bit distracting.

Here is the little quilt all finished.

I did take a couple of close up photos before I posted it off to Houston.


Hopefully someone will like it enough to bid on it.

Email ThisBlogThis!Share to TwitterShare to FacebookShare to Pinterest
Labels: Houston, Under the Sea

I have been lucky enough to win a 2nd prize in the Sydney quilt show this year with my bush fire quilt.

I received a gift voucher from BeBe Bold, a wonderful shop that specialises in Japanese fabric and embroidery. Here is what I bought with my voucher, needles and fabric. Thank you Jane McDonald of BeBe Bold. 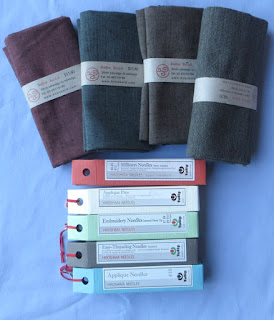 I was also lucky enough to receive a voucher from the NSW shop Fortune and Fairies. I decided to buy some backing fabric for a couple of quilts that I am intending to make. 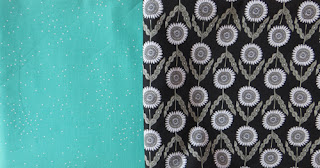 I also received some lovely prizes for my quilt A Time for all Seasons at the Victorian Quilters Showcase.

I received 4 boxes of Madeira thread; I now have the complete set of poly, rayon, cotton and metallic thread. I am very grateful for their generous prize. I have already started to use the thread, my machine loves it and it is so handy to have the range of colours and tones.


I also receive some gorgeous Valdani threads from Maytime Distributors. I love Valdani thread. Those beautiful threads are supposed to be colourfast as well.

I also received a gorgeous Yazzii Bag with plenty of pockets and space to keep a project when you are travelling.


I have written thank you letters to these generous sponsors but I thought I should also mention them in my blog because all quilt show organisers really appreciate the generosity of sponsors especially in these tough economic times.

It's wonderful to finally finish a quilt and enter it into shows and so exciting to receive a ribbon, to receive a prize as well is icing on the cake.

A Time for all Seasons- Spring

Spring is officially here in Australia, we managed to get through winter without too much cold weather I think.

I enjoyed making the Spring blocks for my latest quilt A Time for all Seasons.


I started the spring section with a sunrise to represent new beginnings.


Here is a detail photo of the block.


I put a nest in the sunrise block to also represent new beginnings.

I did a blog post all about how I made the nest and you can read about it by clicking here.

I had to include a blossom tree in my Spring section because it is always so exciting to see the blossom trees come to life and I realise that the fine, sunny weather is approaching.

Where I live we also have a lot of windy days in Spring so in my next block I tried to represent the wind.

I tried to keep the corner of the Spring section light and breezy.

Here is a photo of the Spring section from the centre of the quilt in the clock section. I included butterflies and bees as well as some spring flowers.

It's always good to feel some sun and notice the days getting slightly longer.

Bye for now,
Linda
Posted by Linda Steele at Tuesday, September 06, 2016 No comments: