I still feel in holiday mode but next month all the groups I belong to will start and I will be back into the thick of it again.

I don't make New Year resolutions but I often think of a word as inspiration for the coming year. The word that keeps popping into my head is Preparation.

I am a morning person and often feel as if I am the only person who loves Mondays. I love the feeling that I have a new blank page in front of me just waiting for me to fill. So a new year is like all the mornings and Mondays rolled into one, instead of a blank page, I have a whole new book to fill.

So I have been writing lists and planning my year ahead. I am in the middle of a new crazy quilt with a seasons theme and I would love to be able to finish it this year. The trouble with hand embroidery is that it takes so long.

I haven't done any quilting for a while so I thought I would get some blocks basted together and put them next to the machine for some occasional quilting practice. I found some fabric in the cupboard that I will probably never use in a quilt that will be perfect for practice. 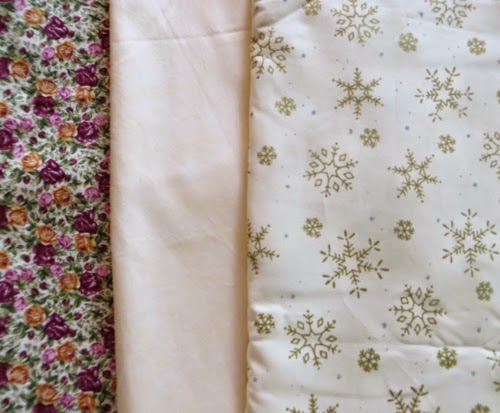 The floral fabric on the left will be sashing and the plain in the middle will be the quilting squares and the one on the right will be the backing fabric.

I think I will put some crazy blocks together for some embroidery practice as well.

At the moment I am doing an online camera course but the more I find out about photography the more I realise how much there is to learn. 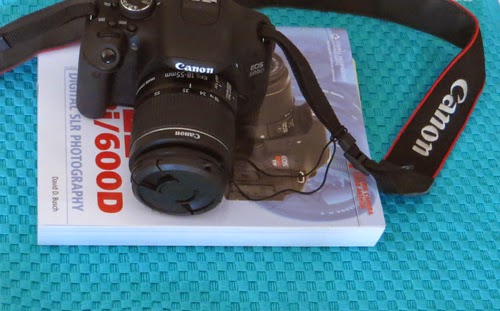 The other thing occupying my time at the moment is a Photoshop course that I am doing online with Pixeladies. I already use Photoshop to re-size my photos and do some other things so luckily I am not a complete beginner but I am still picking up lots of tips and tricks. You can print out the lessons but the really good thing is all the lessons are on video and I find it so much easier to learn that way.

The Waverley Art Quilters start again next month and our holiday homework was to make a sketch book with painted pages and inspirational photos and I still haven't started that.

Two years ago I designed a miniature applique quilt and I haven't started it yet, maybe this year?

So you can see I have plenty to do and it will be interesting to look back at the end of this year and see what I managed to get done.

You may wonder why I am trying so hard to be prepared and the reason is that from Easter onward I will be minding my granddaughter 5 days a week! It's is only for this year but I am starting to realise what a big commitment it will be.

We celebrated Christmas at our place and it was the first Christmas with our grandchild, Savannah, My husband's father was also there so we had four generations at the Christmas table.

The next day my husband and I went away for a few days. We decided to drive interstate to Adelaide and visit family and friends and instead of driving the straight route we drove along the Great Ocean Road to see the beautiful coastline that everyone always talks about.

We stayed at Apollo Bay the first night and then set off early the next morning for a day of sightseeing. The first stop was at Ngatanwarr, which was part of the Great Otways National Park. We went on the Maits Rest Rain-forest Walk and because it was 7.30 in the morning we were the only ones there. It was so lush and green.

From there we drove along the coast to the Twelve Apostles, we certainly found the holiday crowd there. We could hear so many different languages spoken, it must be a huge tourist attraction. I have wanted to see the Twelve Apostles for years and it didn't disappoint, those limestone rocks were just as beautiful as people said.

We spent a long time there and I took a lot of photos. There are many lookouts along the Great Ocean Road and it would be almost impossible to do them all in one day but we did go to quite a few.

Loch Ard Gorge was beautiful, almost like a secluded beach, except there were many tourists there!

There were little caves along the shore and some more adventurous souls than I went exploring.
We walked down many steps to find a beautiful little grotto and I can't remember the name of the place.

After a long day of sightseeing the beautiful coast we stayed the night at Warrnambool and set off early the next morning for the eight hour drive to Adelaide.

We had a lovely time in Adelaide visiting family and friends and one night we were having dinner at Brighton beach and we watched a beautiful sunset.

We were only there a few days and we had the long drive back home but our daughter had dinner waiting for us when we arrived.

I spent the next few days packing up the Christmas decorations and cleaning the house.

Last week I taught crazy quilting at the Victorian Embroiderer's Guild. It was a two day class and they were a lovely enthusiastic class and one of the ladies even finished her journal cover and the others weren't far behind. 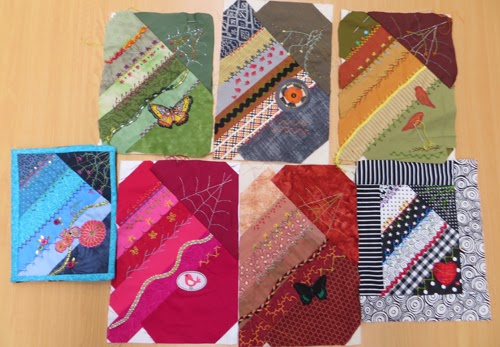 After that great rest and change of scenery I feel ready to start 2015. I wonder what this year will bring?