I have been participating in a Round Robin with the online group the Southern Cross Crazies. We all had to make six, 6" crazy patchwork bases and send them off to the next person on the list. Most people give details of what sort of theme or colours they would like for their blocks.

The last set of blocks I received were from Glenda and she wanted lots of lovely flowers or a garden theme if I remember correctly.

Because I was the last person to work on Glenda's blocks I didn't have a choice of bases, I had to work on the one that was left.

I didn't want to repeat the flowers that the others in the Round Robin had done, so I tried to make it a bit different.

Here is the finished block.

Here are a few detail photos so you can see the stitching better. 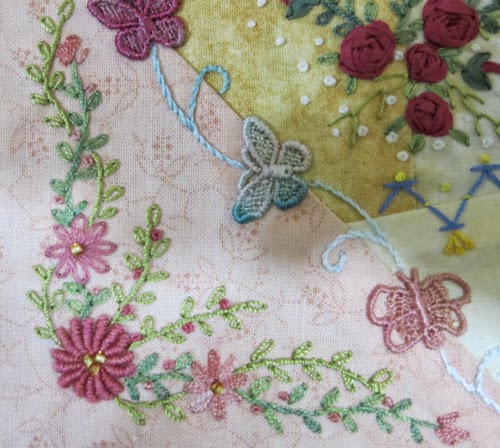 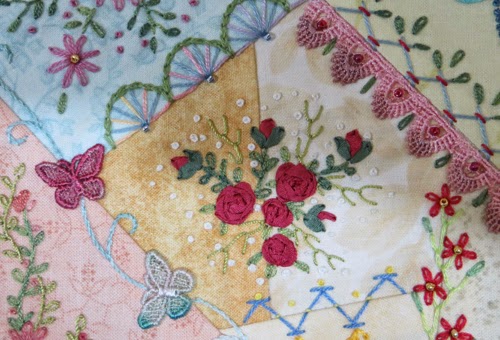 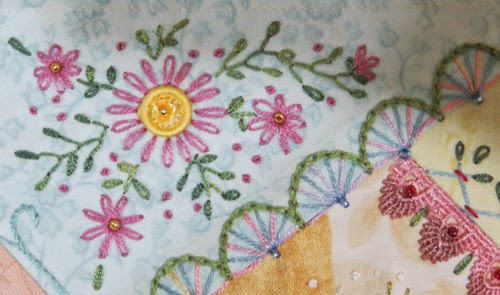 I also took some photos of the blocks that other people in the group did for Glenda. 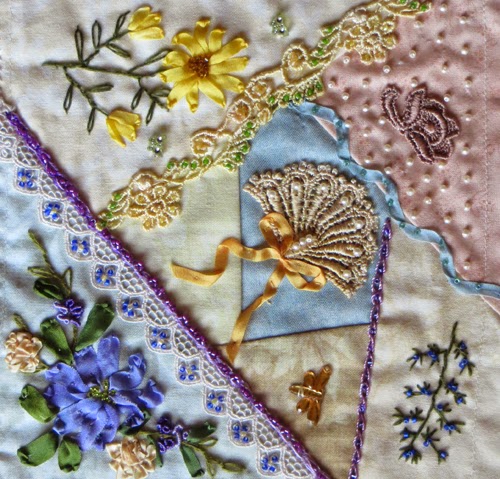 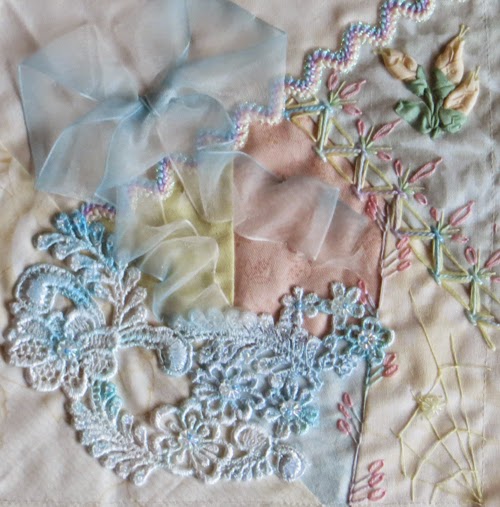 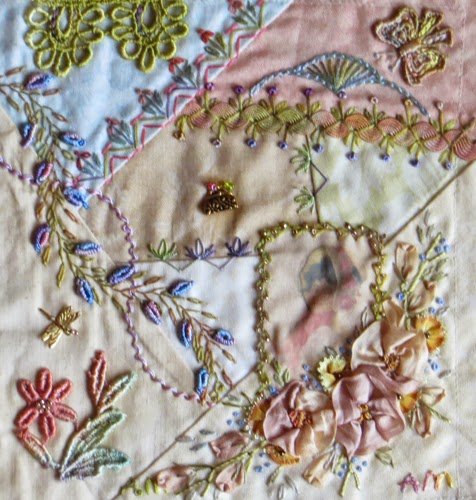 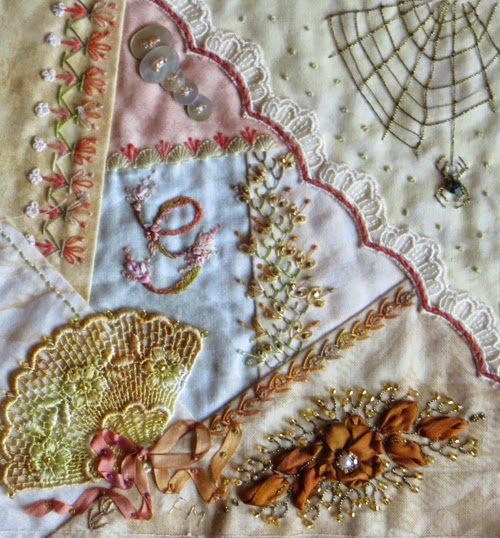 They are all beautiful aren't they? Because of I been a member of this group for a few years now, I can recognise the different quilter's styles and know who did the blocks without looking at the names.

That's the end of the Round Robin for this year and although I have enjoyed participating, it is still time consuming and I am enjoying getting on with my own work now.

I'll show you the crazy blocks that I have received back in another post.

I have been a big fan of photographer Alexia Sinclair for a few years now; ever since I saw television program about her.

Earlier this year I received a newsletter from her to say that she had decided to release a limited edition print of one of her photos to raise money for a new camera. I didn't hesitate long and quickly put my name down for one. It was like a dream come true for me.

I have recently had it framed and I will confess that the framing wasn't cheap because I ordered museum glass so there is no reflection. I have it hanging in my family room, so I see it every day.

Believe me when I say that my photo does not do it justice.

You can see a short video about the making of the photo by clicking on the link below.

The making of Cabinets of Curiosity

If I could ever make a quilt like that I would be very happy.

Email ThisBlogThis!Share to TwitterShare to FacebookShare to Pinterest
Labels: Inspiration

There is a new book on the market called 500 Traditional Quilts. I was thrilled to find out that 4 of my quilts are included in the book. 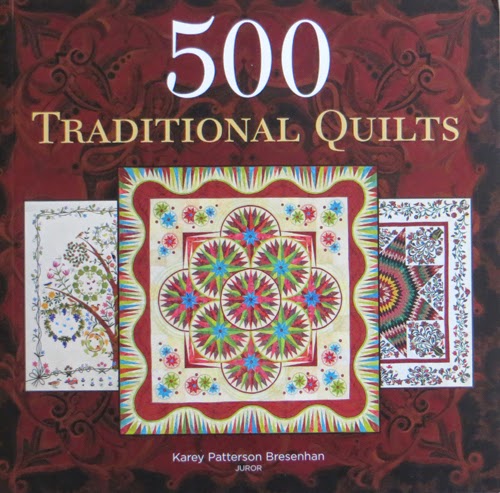 It is a compact 8"square book and quite thick. Of course I am biased, but I think the book is beautifully put together. The publishers have taken a lot of care to make sure that quilts that are on facing pages work well together.

Every type of traditional quilt is included and although most of the quilts seem to be American there are quilts from the UK, France, Japan, Canada, Brazil and Australia.

Here are the four quilts of mine that have been included.


There is going to be an exhibition of many of the quilts in the book at the Houston Quilt Show this year and then the quilts will travel around America for 12 months.
The 3 quilts that will be in the travelling exhibition are Scottish Dance, Naturally Crazy and Crazy about Ballet.
Holiday Waltz is in France for the Australia Quilts Exhibition.

I actually have 5 travelling quilts at the moment because my Christmas Crazy is travelling around America with the World Quilt Show. What well travelled quilts I have!

In June this year the Waverley Art Quilters challenge theme was Industrial. This was a very different topic than most of us were used to but that is the idea of the challenge, to try and stretch us, take us out of our comfort zone and ultimately find our creative voice.

I decided to use a photo that I had taken on the Needlework Cruise to New Zealand earlier this year. I took the photo as we were leaving Napier, that wonderful Art Deco town. 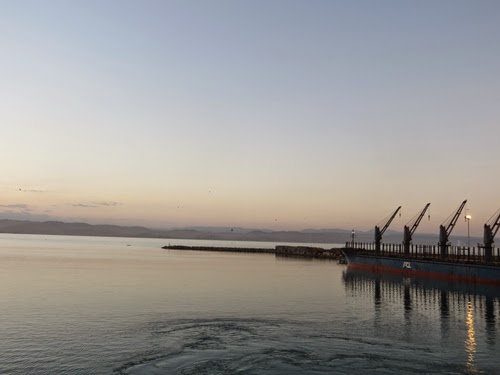 I don't take many industrial photos but I chose this one because it seemed to have some interesting reflections and I am still trying to work on them. I had to crop a lot of the photo though because we are only working on an A3 sized quilt. 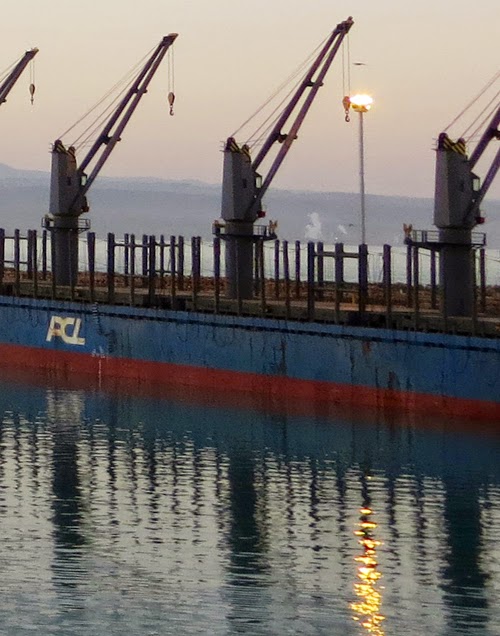 Cropping the the photo made it look more Industrial and not so scenic. I also got a better look at the reflections as well.

I used Vliesofix to fuse the shapes and quilted it without finishing the edges. I think that it gives a more realistic look.

Here is my finished quilt.

It was actually quite fiddly to do and in hindsight I could have used darker background fabrics to make it look more like evening. As always it was an interesting experience but Industrial quilts are probably not going to be my thing!

Every year the IQA (International Quilt Association) Houston run a silent auction to raise money for all their various quilting promotions. You have to be invited to donate a quilt and I have been very honoured to be asked for the last few years.

I always like to donate something because I have been to Houston twice and it is the most wonderfully well run and happy quilt show that I have ever been to. I have also been lucky enough to win a few prizes in their show.

I usually make a small quilt that is similar to a quilt that I have entered in the judged show but I didn't enter this year. All my teaching commitments, the cruise and the Waverley Patchworkers quilt show meant that I not only didn't get a quilt finished, I didn't get one started!

I remembered that I made a little crazy quilt for the Waverley Patchworkers Red and White with a touch of Black challenge and so I have decided to donate that.


﻿﻿﻿This is what the base block looked like before the embroidery. 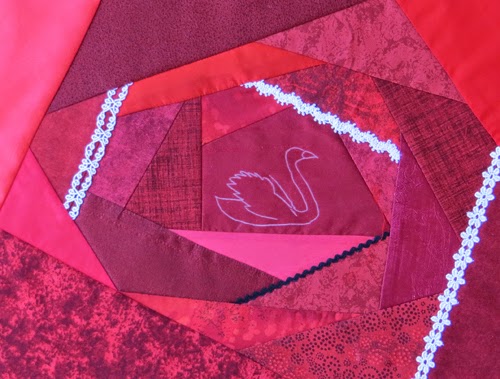 From the look of the photo I must have been going to embroider the swan but I must have changed my mind afterwards because I ended up appliquéing him.

Here is the swan completed. 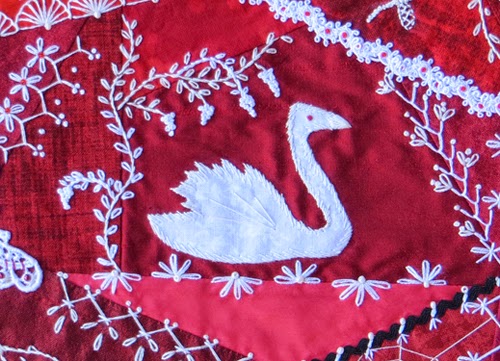 I have another couple of close-ups as well. 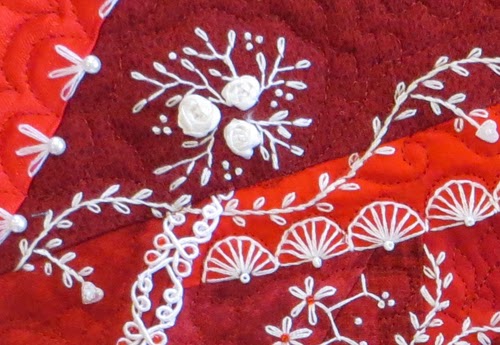 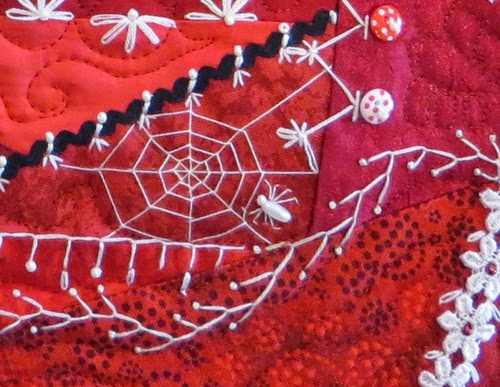 I am posting it off to Houston today, I hope someone bids on it and they raise some money.