I have had so many friends on holidays overseas this winter that I was beginning to get envious. Everyone needs a holiday every so often and last week it was my turn. I didn't go overseas but I did venture further north to some warmer weather.

We went to the Gold Coast which is about an hour's drive south of Brisbane which is the capital city of Queensland. It was so much warmer although it is still winter up there we had a maximum temperature of 22 degrees Celsius instead of 12 degrees here in Melbourne.

We had a lovely apartment right across the road from the beach.

Although it was too cool for swimming we went for walks along the beach most days and water was quite warm.

My youngest son and his girlfriend came with us so we went to the Theme Parks which are a big tourist attraction up there.

I loved Sea World and could have spent more time there. They have everything so beautifully displayed and really care about the sea creatures.

We saw the penguins first.

There was a penguin slightly sectioned off with a baby penguin and while I was standing there another penguin stood on the other side of the little fence and the two adults seemed to be kissing each other. They both stretched up the necks and then brought their beaks together and stood like that for ages.

I am sure they must have been the mother and father of the little baby.

We saw lots of Sea Lions and there is a big Polar Bear enclosure but the bears were very sleepy when we were there.

Sea World has a huge fish enclosure that seemed to house so many fish. It was mesmerising. 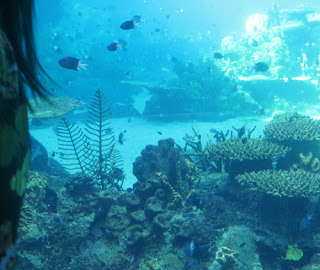 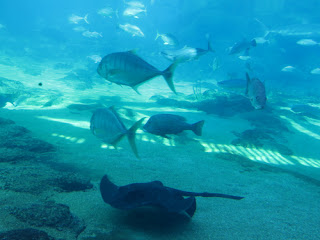 I think I enjoyed it especially because I am currently making an underwater themed quilt and there was inspiration everywhere.

When we came out of the huge aquarium there were some shallow pools with starfish and coral that you were allowed to touch.

The starfish felt really hard almost like concrete, but the Sea Cucumbers were the softest thing I have ever felt.

The last thing we did was watch the wonderful dolphin show. I tried to get a photo with the dolphins all up in the air but by the time I took the photo they were on the way down.

We also had a day at Movie World. 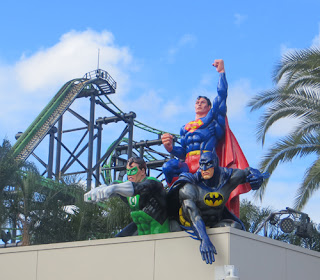 The family actually got me to go on the Scooby Doo Spooky Roller coaster saying that it was more fun than scary. 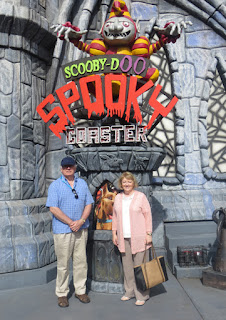 My son and his girlfriend went on the ride 3 times. Once was enough for me, I was sure that I would fall out of the cart. I don't know how people can go on those really big roller coasters.

We stayed until the end when they had the Grand Parade down Main Street and we saw all the Warner Brother and Batman characters. 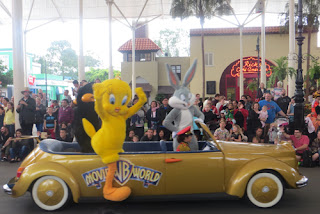 It was a fun couple of days and we did do more than go to the theme parks and I tell you all about them in the next post.

Last month the Waverley Art Quilters were researching ways to use Architecture in an art quilt. We are using Sandra Meech's book Connecting Design to Stitch as a guide.

Architectural inspiration can be found in arches, alleyways, bridges, modern skyscrapers or sculpture.

Sandra Meech suggests that we consider reflections in windows, textures on distressed door panels or even patterns on a construction site.

I loved the photo I took of the Sydney Opera House last year but I would be more interested in making a quilt about the reflections on the water than the architecture of the building, as lovely as it is. 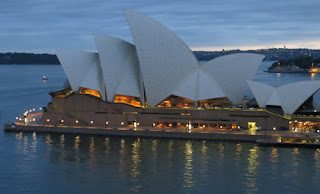 After going through the many photos of buildings that I have taken, I realise that I was not really interested in making a quilt with a building as a subject matter. I am more interested in the details on the building, or the gates, the ornamental tiles and wall decorations.

Here are some photos that I took in the Dunedin Railway Station in New Zealand. They could be inspiration for an applique quilt or a quilting design. 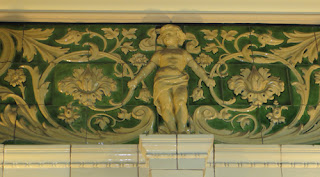 I have used Architecture as inspiration last year when I made a small quilt about Flinders Street Station. Instead of using the building, I used the clocks that are on the front of the building as a more abstract subject.

I also used the Easter Island Statues as inspiration for a small Art Quilt.

I am finding the research into the various topics very interesting.

I am making a Crazy Quilt with a Seasons theme and I decided to try and recreate an Autumn Fog or mist.

I got out all my scraps of red wool and scrim and started building up some ground onto a piece of water soluble fabric to look like autumn leaves that have already fallen. 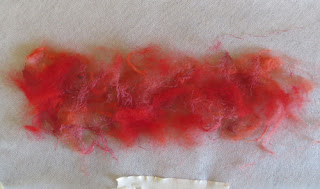 Then I added some thread snips to look like twigs and dead leaves. 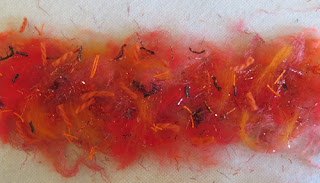 To help blend it all together I put a piece of red organza over the top. 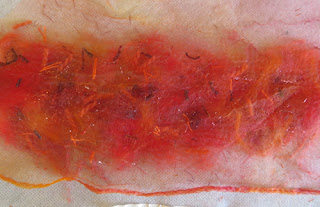 I put a piece of wash away Solvy over the top and free motion stitched it to hold it all together.

When I had finished stitching, I washed away the water soluble Solvy by immersing it into a bowl of water. I squeezed the excess water out with some paper towel and left it flat to dry.

To make the background, I sponged some paint to represent trees onto some silk fabric. I used some green and gold paint and did a rough drawing of where I would embroider some trees. 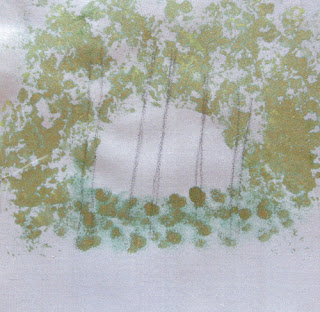 After I had embroidered the trees in a pale colour to represent the trees that were to be in the distance, I placed a piece of organza over the top to give a misty, foggy feel. 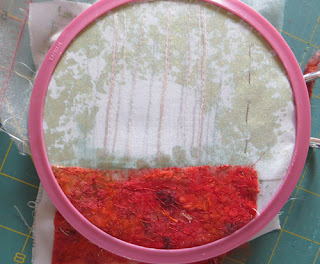 Then I embroidered the trees that were in the foreground a darker colour. 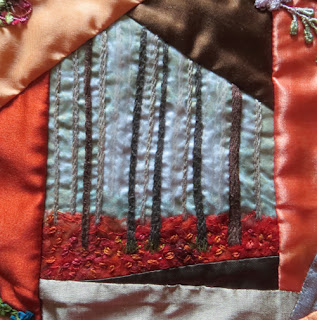 I think that it does look a bit misty and foggy! I added some hand embroidery over the top of the red to look like like autumn leaves.

It was fun to play around with wool and water soluble fabric and I would like to do more of it.

I belong to the Art Quilt group named SAQA (Studio Art Quilt Associates) and the Oceania Branch have a private group on Facebook where challenges are set and we can get to know each other a bit better and be inspired at the same time.

Sue Dennis suggested our next challenge should be Adventure. She challenged us to try something new and maybe put ourselves out of our comfort zone for a while.

I have had the book Cut, Shape and Stitch by Maggie Grey, Samantha Packer and Paula Watkins for a while and thought that now was a good a time as any to try out some of the techniques. 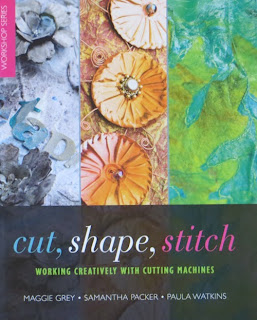 The book is all about creatively using the cutting machines that are available at the moment.

I have had the Accuquilt Go Cutter machine since 2012 and I must admit that it is seldom used. When I have used it I have been very happy. 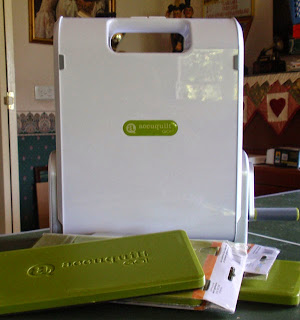 I had plenty of mono printed fabric and paper left over from my experiments last year and the Go Cutter machine cut through it beautifully. 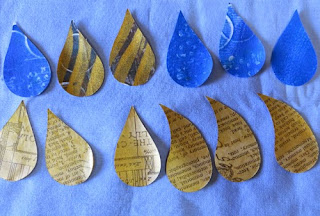 I also had quite a few hole punches; I had bought them thinking it would be a good way to cut tiny fabric circles but I soon discovered that they don't work very well with fabric. 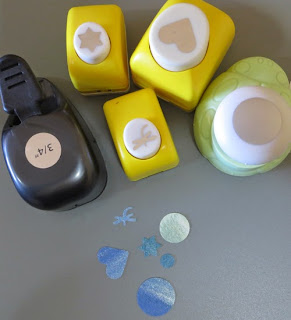 I found that they work really well with paper and interfacing and all sorts of painted synthetic products that are available to art quilters.

When interfacing is painted it becomes much more like a fabric and can be a different texture to use in art quilts.

To make the clean-up easier when painting I use disposable bowls and wooden sticks for stirring. 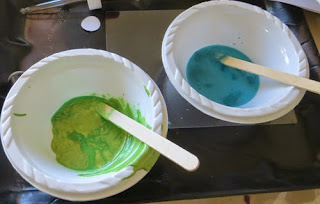 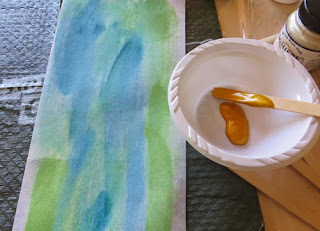 The paint made the interfacing firmer and it was a beautiful fabric to cut.

The book also suggested that craft metal could be cut with the cutting machines. I had some metal that I had used a few years ago and I was surprised how easily it cut and I could have much more precise shapes than if I had cut them by hand.

I was so glad that I was encouraged to have this adventure. I have many books at home with all sorts of great techniques but don't take the time to play around with them.

I have no idea what I will do with these shapes but it is certainly something that I should do a bit more with. I suppose that felt would also cut really well!