Ready for the Victorian Quilt Show?

It's actually the Craft and Quilt Fair but as well as all the wonderful shops to visit we have the magnificent quilts to view.

It's held at the Melbourne Exhibition Centre at South Wharf in Melbourne (also affectionately known as Jeff's Shed). The show is open from 9am to 4.30pm and remember to be there before 9am if you are driving to get the early bird parking.

I will be there every day helping Victorian Quilters with the setting up as well as lots of white glove duty.

I will also be at the awards ceremony on Thursday as President of Waverley Patchworkers to present a prize. I must get a photo of the person who wins our prize.

I also have one of my coral reef quilts in the show. Here is a sneak peak of some detail. I did lots of hand embroidery on this one. 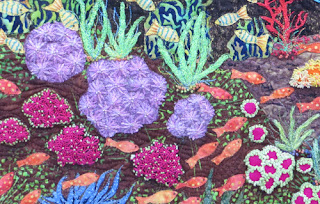 Hope to see you at the show, it's always great fun.

I completed a new quilt in my coral reef series and I called it On the Prowl. The quilt is all about Lion Fish and how they trap smaller fish against the rocks and kill them with their poisonous spines.


I find it incredible that such a beautiful fish can be so dangerous. When the Lion Fish appear,  the small fish dart everywhere trying to get away from them.

I actually started this quilt at the beginning of the year just for some fun while my sewing machine was being repaired.

Here is a photo of me trying to replicate a cave. 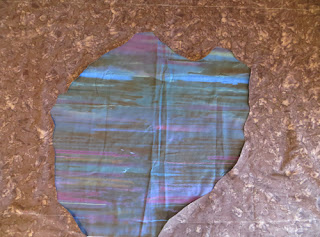 It doesn't look like a very promising start does it? I actually painted over the background water fabric because the original fabric had too many colour variations and wasn't quite dark enough for deep in a cave.

Here I am trying to find the correct fabrics for the rocks. I must have made the fish first because I knew that they would be the focus of the quilt.

Here are some close-up photos of the Lion fish. I used organza for their fins to give a more delicate look.

Finally another detail photo of the top right corner, apart from some colonial knots all the coral detail is done by machine.

I have finished the next round in the Southern Cross Crazies Round Robin. Six of us from the group are participating in the current round robin. What is a round robin?  Well the rules are slightly different with each one but with this one we had to make up some 6" square base blocks and send them on to the next person on the list of participants. 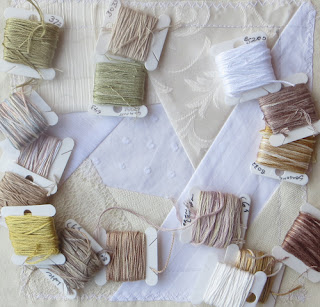 When you receive the blocks you pick one and decorate it with crazy quilting stitches and then post them off to the next person. Eventually all the blocks get embroidered and you receive your own blocks back. It's up to you what you do with them after that.

This round I received Maureen B's blocks. She wanted us to only sew on the seam lines in neutral colours and no motifs, beads or lace.

Here is what some of the others had already done for her. I noticed that they couldn't help themselves and added some heart motifs. 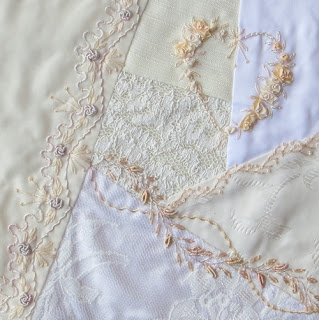 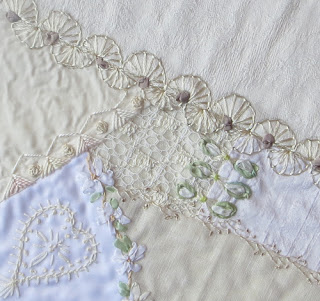 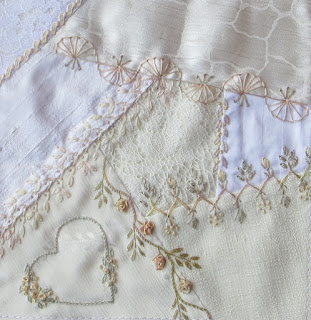 It was actually hard at first to only sew on the seam lines and not add any motifs, but I got away with it by sewing some wide seam embroidery and it went very quickly.

This is what it looked like when I had finished. 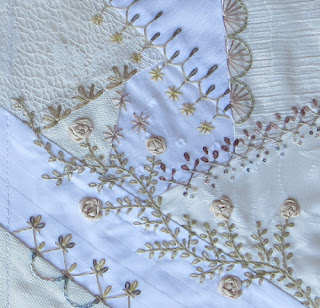 Only one more round to go, I wonder what the last lot of blocks will look like? I enjoy getting the parcel in the mail and see what the others have done.

The Waverley Art Quilters go on an excursion every year and this year we went to the Tarrawarra Museum of Art to see the William Dobell exhibition.

William Dobell was an Australian artist who lived from 1899 to 1970.

Here is his self portrait painted in 1932.

He was involved in controversy when he won the Archibald Prize (a prestigious portrait competition) in 1943. Two competitors began a court case saying that Dobell's portrait of Joshua Smith was a caricature and not a portrait. The actual portrait is on display at the gallery.


They lost the court case and Dobell retained the prize but the court case affected him greatly and he retreated from public life for a while and painted landscapes. He must have recovered though because he won the Archibald prize two more times.

He did have a distinctive way of painting portraits, he wanted to paint the person's personality and nature rather than an exact likeness.

Here is his painting of Dame Mary Gilmore painted in 1957.


There are many other wonderful paintings by William Dobell as well as many sketches that he drew before he started his paintings. It is so interesting to see them.

As well as all his paintings there are also paintings in a section called Dobell's Circle, which are paintings by his friends; they used to meet and discuss painting together. He had some famous friends.

We loved seeing these as we have already studied many of these artists in our group and we have found that we really appreciate the artist and their paintings if we have read about them previously.

There are some paintings by Jeffrey Smart; his paintings are so distinctive.


There was a still life by Margaret Preston.


There was also a still life by Margaret Olley, she loved colour.

There was an artist that we haven't studied but I can't resist mentioning it because it just glowed. It was Evening by Russell Drysdale, my picture does not do it justice.


As well as all the paintings there are the beautiful views onto the landscape around the gallery. 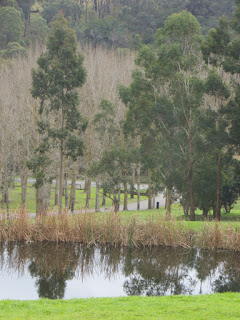 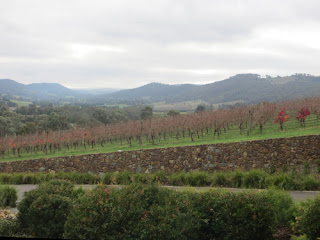 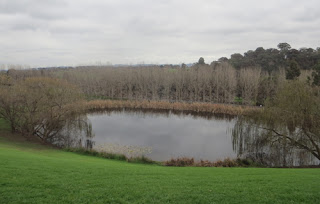 It is a beautiful gallery and the paintings are so well displayed and beautifully lit. I highly recommend a visit if you are in the area.

Here is a photo of our wonderful group, not everyone could make it but those that did really enjoyed the day.

The exhibition is on until August 13th 2017 and the address of the Tarrawarra Museum of Art is 311 Healesville-Yarra Glen Road, Healesville, Victoria.