Playing around with Sun dyeing

I have been playing and around with my Sun-dye paints when the weather is fine. Sun dyes are a thin paint made in Australia that can be used as a paint as well as using it for sun printing.

I painted a piece of fabric with magenta and sprinkled some salt over it and sat it in the sun to dry. It is winter here in Australia so the sun is weaker and you get a softer result than you would in the hot summer sun.


I pin the painted fabric to a stretched canvas that still has its plastic on it so it won't blow away if a wind springs up.

This is what it looked like after it had dried and I washed the salt off. 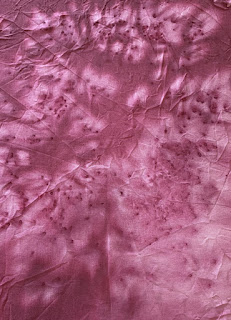 It looks nice but I would find it hard to use like it is, so I painted it again the next day with some Flame red and Wattle yellow. Now I could imagine being able to use it. 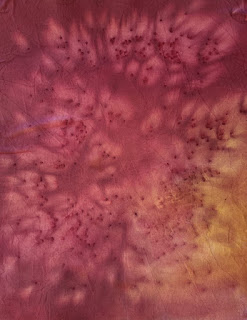 The salt resist gives it some texture instead of just being a plain fabric. I can imagine using sections of it for applique.

I was seeing what sort of texture and effects I could get. Next; I tried pleating the fabric and letting it dry. It is more rough folds than pleating actually.


This is the result. 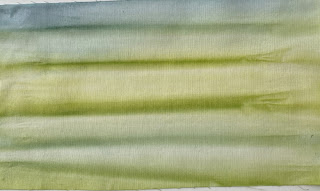 I like the effect and could imagine it as a background or in a landscape quilt.

I tried some stencils next, I didn't give the stencils much thought, I just grabbed whatever was on the top of my pile. 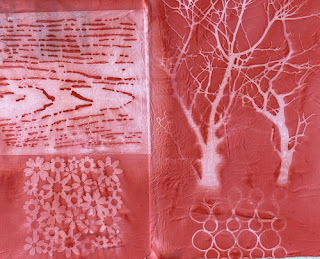 Once again, I over painted them. 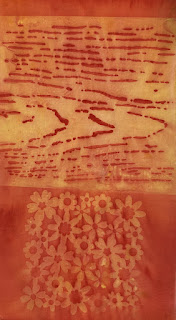 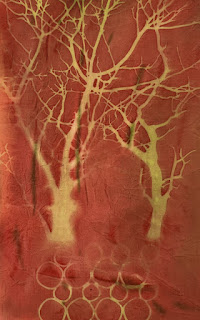 I could imagine being able to use them. It's amazing how much better they look when you crop just a part of the fabric, it gives it a new life.

Finally, I tried some stamping, I had to wait for the stamp to dry before I painted over it. 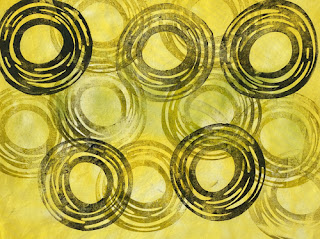 This seemed much too graphic for me unless I was doing something very modern. I tried again with a softer contrast. 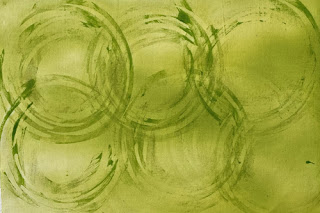 Yes, probably more suited to my taste. That could easily be cut up for leaves.

I am liking the sun dye paint and will definitely keep using it.

But now a part of me wants to try dyeing fabric again! I said that I wouldn't dye anymore because I hate all that rinsing out afterwards. But I have seen another way of dyeing that is more controlled instead of just bunching it up in a bucket.

I have a couple of projects that I have to finish but once they are done, I'll give this other method of dyeing a try. I'll just use the dyes that I already have and give it a go.

I'll let you know how it works out, but it won't be for at least another month.


More great experiments! I've tried the salt method before and liked it but I don't think I went far enough with it. Adding different colours to it just took it to a whole other level. Seeing the pleated piece made me wonder if it's possible to combine the two methods and see what might happen. Might soften the look of the stripes somewhat. Then again, might looks like something the dog dragged in too!!

Your sun prints are lovely!!! With out 94 degree weather, my fabric would be dry by the time I turned around to go back in the house!! HA

Oh Robbie, I am looking forward to summer again. It's so free and easy.

I agree Magpie Mumblings, there is no limit to the number of things to try. I like your idea of the stripes and the salt. Must put it on my to-do list