A couple of months ago as the UK went into lockdown, Laura Kemshall from Design Matters TV announced that she was teaching an on-line sketchbook challenge that would go for 8 lessons.

We were actually just coming out of lockdown as we had no more virus cases and all the shops were opening, but I decided to sign up anyway, just for fun. Laura suggested that we don't use a sketchbook that was spiral bound and of course all mine had that except for one that I had made years ago and had never used. 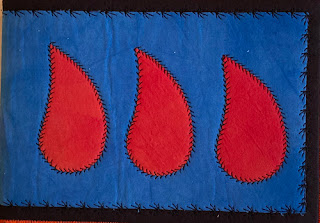 I had made this sketchbook out of good watercolour paper, so it was perfect for the project.

Week by week, she went through many ideas and examples of what we could do. What a perfect chance to get out my paints, pencils, stamps, stencils and bits and pieces and play around. Laura suggested that we try lots of things and all different media, to discover what we really like to do. Not to worry if something doesn't work out, you just paint over it and try again.

On one page I glued in a magazine picture of some apples.

Then I painted the background green, added some text with some stamps and did some drawing with a black felt tip pen.

I wasn't happy with a page that I had painted orange and black, but I was trying not to be too pretty!

So, I drew some jugs on some white paper and glued them in and added another drawing on the other page.
Not perfect but I liked it a lot better than before.
I glued another magazine photo of a rabbit. 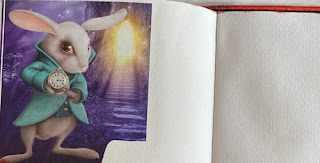 I didn't know what I was going to do with this page, so I tried doing some painting around it.

I still wasn't happy, it was far too messy for my taste. When we got up to the text lesson, I tried again.

I like it better now, but I am just experimenting and trying things out.

I had painted a photocopy of a dead agapanthus flower a few years ago and so I glued that picture down.

I decided to paint blue onto the rest of the paper and then draw some agapanthus flowers in various stages as they were just coming into flower in our garden.

I had a mono-printed vase on one page and then drew another on the facing page.

I had glued down a photocopy of some red leaves and painted around it.

Once again, I tried stamping some text and added my own drawings to finish it off.

I'll just show one more page, I had some spare copies of a photo of two of my grandchildren, cousins Jack and Savannah hand in hand doing some Christmas shopping last year.

Laura had taught us to paint some gesso over the outside of the photo so it could accept paint. Then I drew some Christmas pictures around it.

It was a lot of fun to do. Drawing with a felt tip pen can be scary but you just have to be brave and put up with drawings not being perfect.

I guess it is pretty decorative and not really art but it's my book and my chance to play around.

I've done lots of other pages and still have 4 or 5 blank pages to do. I love doing this so much more than I thought I would. The pages can be quite time consuming and I could probably just keep going and do nothing else.

I think I will make another sketchbook and keep doing some pages every so often next year and see where it takes me.

I already know that I like neat rather than messy, so surprise there! I love text and love drawing with a black pen.

I haven't had a lot of practice mixing paint colours, so I would like to improve on that. I'll have to spend some time doing that.

Email ThisBlogThis!Share to TwitterShare to FacebookShare to Pinterest
Labels: Books and magazines, Sketchbooks

I really enjoyed seeing your experiments and the results were pretty great as far as I can see. I'm not comfortable doing anything like these and I suspect it's because my perfectionist tendencies get in the way. I think my favourite has to be that wonderful rabbit but there's also something really appealing about the orange jugs too.

Thanks Magpie Mumblings, I love that rabbit photo too and I like the jugs, I think we have the same tastes

Wish I'd heard about that - it sounds like good fun. I love what you have done with your sketchbook, you are very imaginative. I've got a lot of sketchbooks and journals still unused, so I might take a leaf or two out of your book and have a go :-)

The class was so much fun, Gina. Now to get some more hours in the day!!