I spent the last few weeks before Christmas working on a piece for Brenda Gael Smith's latest exhibition called Vision 2020. She announced the idea a few months before and as usual I never have an idea straightaway.

Then in late November, I got the idea of people having a vision or thinking about the future of coral reefs, as they are currently in danger. I wanted to use a face and took a few photos of myself that I wasn't very happy with. I went to the shopping centre with my daughter and her children to get 4- year-old Jack's haircut. He hates haircuts and you can hear his screams all over the centre. When it was finally over, I took a photo of Jack. Jack doesn't know how to act in front of a camera and instead of just smiling he did this funny side to side look. 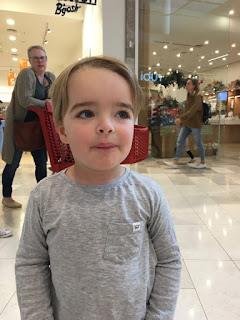 Anyway, it was just a fluke but it was the perfect face for my quilt, Fragile Future.

I was absolutely thrilled to find out that I was one of the accepted entries and they will be on display at AQC (Australasian Quilt Convention) in April and then going on to tour around Australia and overseas.
Working on that quilt meant that I didn't make anything for the AQC challenge called Going Green this year. I decided to take the pressure off myself and I am glad that I did.

I also received the news that my quilt Magical Coral Reef got accepted into Gems of the Ocean in Oregon, USA and it will be on display there in February.


The other good news was that one of my contemporary quilts called Connections-The Teenage Years got accepted into Art Quilt Elements 2020 in Pennsylvania USA and will be on display there in March.


Just in case you think I live a charmed life, I have just heard that I didn't get into the Australian Textile Art Award, so I certainly don't get into everything I try out for. It was just a lucky start to the year.

I wouldn't say it was "lucky"...I would say your acceptance into these wonderful venues are WELL DESERVED! Congratulations!!!!! How very exciting!!!!

Thank you Robbie, I read an article once saying that women say lucky and men say well deserved because of hard work! I guess I am a typical woman.

You'd certainly never know that there'd been huge hair-cutting trauma just prior - what a sweet little face (both his AND in your version). Congrats on being accepted to the shows!

Thank you, I must admit as soon as we were on the way to the ice cream shop he'd forgotten how upset he was.