My son Cameron arrived home from Japan last Friday, just before all Qantas flights were grounded. It has been such a stressful time.

He has been teaching English over there for 12 months and his contract expired on the 31st March and he had a flight booked for the 1st of April. All would have been well but the Corona Virus hit and his flight was cancelled.
He asked the company that he worked for if he could leave a few days before his contract expired and the reply was that if he did, he would not get his bonus and wouldn't get a reference!

He would have been stuck in Japan with no job and no apartment. Cam and I had so many messages back and forward because he didn't know what to do and the virus situation was changing daily with our Prime Minister urging all Australians to return home before the borders were shut.

Finally, the school relented and said he could have a reference but not the final money. Cam managed to get a flight after a lot of worry.

Here he is just after landing, he had been flying for 20 hours and had 3 different flights to get home. 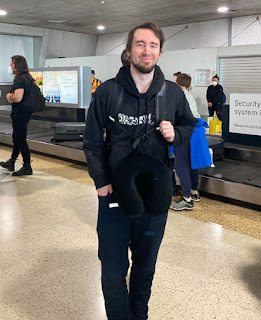 I didn't realise how pressured I felt until he got home and all of a sudden, I felt as if I could sew again.

He is now in isolation for 14 days to make sure that he doesn't have the virus. I have set up the lounge/dining room with snacks and drinks and I will leave his meals at the door. He doesn't mind being isolated at the moment but it's early days. He loves playing video games with his friends on-line and is just glad to be home.

I can now think about what sewing I can do. I have bought three backing fabrics, hoping to have 3 quilts made over the winter.


Another virus problem was that I had sent a quilt over to America for the Visions 2020 exhibition. Two days after I posted it, I received an email saying the gallery had closed and do not send any quilts!
So, a week later I got a call from Fed Ex asking me what I wanted done with the package, I said to send it back to me.

Luckily the quilt has arrived home and didn't get lost and I am grateful that they rang me. 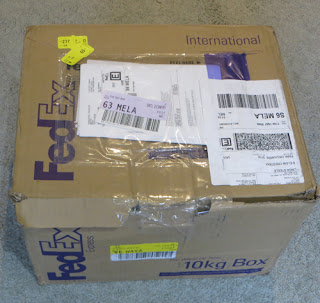 That was a very expensive trip for my quilt. The return trip cost $612.18, it would have been much cheaper, if I could have sent it via Australia Post, but some organisations insist on Fedex. Luckily, my husband is still working but I think I'll have to seriously consider entering into overseas exhibitions in the future.

Still, I shouldn't complain, there are so many people sick or losing their jobs and have such uncertain futures.

I am grateful that my son and quilt have made it back home.

Stay safe everyone. My fridge, freezer and pantry are full and I don't plan on going out very much.

So glad your son is home, Linda!!!! You all take care!!! Things happen for a reason and I"m sure we'll all come through this in the end!!!!

I'm glad your son is home safe! And good to know how expensive international shows can be--I'll just mark that idea off my list!

Wow Linda! I'm very glad your son made it back. I know there were plenty of warnings, but at first we all thought they meant the lock down might only last a few weeks. There was no mention of no international travel for a year or more. That seems to be what we're facing now. I'm glad he made it back to Oz. And your precious quilts too!

Thanks Robbie, it is such a relief to have Cam home. I really appreciate the time you take to comment on my blog. Stay well xx

Thank you Mary, postage has never cost so much before. The prices must have increased. Stay safe and well in these unsettling times.

Thank you Wendy, I agree the changes were happening so quickly, almost daily and everything suddenly became urgent. Hope we all stay well and happy and get through this unscathed.

I am so happy for you that your son is home. It might be hard for him to self isolate but at least he's in comfortable surroundings. As for the price re the quilt - just wow. A relief to have your quilt back but it's astounding how much the postage was. I can see why you won't want to participate in any competitions overseas in the future.

Thanks Magpie Mumblings, I had an email from FedEx yesterday to say that the discount that they offered for being a new customer is now over and the prices will be going up because of the Virus situation! They have priced themselves out of my business.

You're kidding! How can they justify putting their prices up because of the virus....that's simply taking advantage of people. Wow. Good thing we don't have access to shipping via FedEx where I live (it's in Canada, but just not here in my town). I would most definitely ban them!