I saw that SAQA (Studio Art Quilt Associates) had a new call for entry. They wanted people to send them a fish for an exhibition in Florida. It is for a large display and you won't get the work returned. I have just finished a quilt and so it was the perfect time for me to make one; a little project between large projects. Let's face it, I've done a few fish quilts over the last couple of years and so I certainly know how to make one!

I drew up a large fish, about 12" long and used my Caran D'ache fabric crayons and Fabrico fabric markers to mark where I wanted the colours to be. 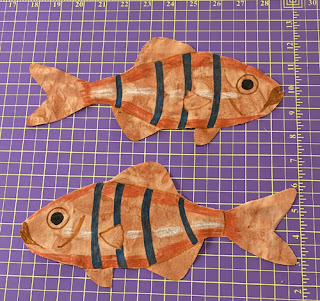 There are 2 fish because I had the clever idea of making it two sided.

I glued the fish onto some water-soluble fabric so I could put it in a hoop. 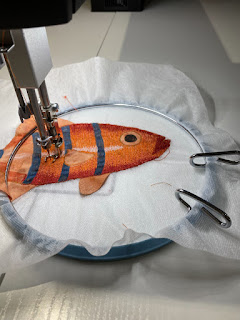 Here is one fish thread painted, you can see how much smaller the sewn fish is compared to the bottom one, I think it shrunk by about one and a half inches. 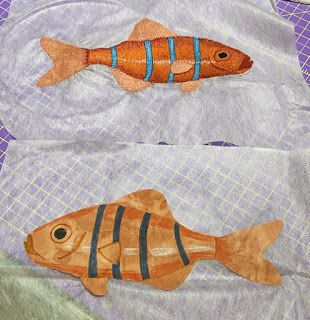 Here is an oops that happened when I was sewing the second fish! The tail accidentally flipped under the hoop. 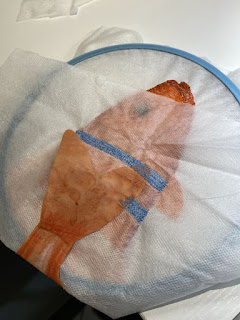 Luckily, I realised before I got too far, there was no way I was going to unpick that stitching. I just cut the tail away and fused a new tail on. No one could tell after it was finished.

I used my Madeira 40 weight embroidery threads. I took a photo with the fish to remember all the threads and colour changes that I had done. 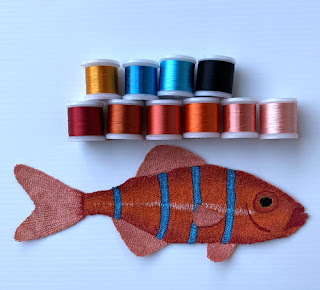 I was happy with the result and was thinking about how I would join the two halves together, when I wondered how anyone would know that I had made the fish? Was I supposed to sew my name on it or something?

I decided to look up the instructions! Apparently, you had to put a label on the back with your details! There went my idea of having a 2-sided fish. I only needed to make one!! Next time, I will read the instructions before I start, ha ha!!

I ended up putting some batting behind the fish and then backed it all with some black felt. 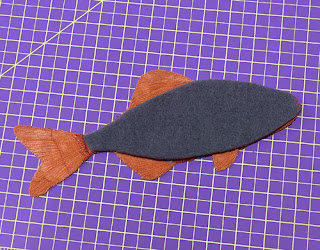 Here is my finished fish. 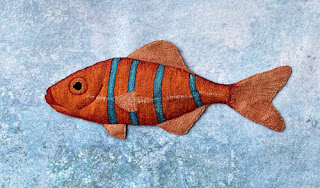 I posted it off to Florida, USA this morning, I hope it gets there by the deadline, the post can be very unreliable at the moment.

While I was making the fish, I felt a little bit sad that I was donating it because they were a lot of work, but now I have one to keep for myself.

I think the fact that you made two was meant to be - just so you could keep one! He (she?) looks amazing - I love the colours.

Looks great Linda, and those madiera threads are lovely to use aren't they?

I agree Magpie Mumblings, there was no way that I would've taken the time to make one for myself. It was a lucky mistake.

Yes, Jude, I love those Madeira threads and so does my machine. I also love that I have the set, so I have so many gorgeous colours