The Waverley Art Quilters are meeting again in person and continuing to work in a series. Our latest choice of topic is Grace Crowley or Journeys.

I chose Australian Abstract artist Grace Crowley who was born in NSW in 1890. Apparently, she was a quietly spoken woman but insisted that her name be pronounced correctly (it rhymes with slowly). She studied at the Sydney School of Art and began as a landscape painter. She later travelled to Europe where she unexpectedly began to appreciate abstract art. She studied with some Cubist teachers and her style began to change.

When she returned to Sydney in 930, she was a very experienced modern abstract artist and held numerous exhibitions. She received the Order of Australia in 1976. In 2006/2007 The National Gallery of Australia held a retrospective of her work called Grace Crowley-Being Modern.

Grace Crowley died in 1979 aged 89. Even though she had a successful career, I don't think she is very well known at all. Maybe because she was a woman and in those days it was very hard to get noticed.

I liked one of her paintings in blue and chose that as my inspiration.

I liked the way she had included line shapes over the top of her paintings so I tried the idea in Photoshop first. 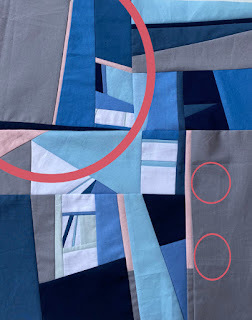 I was happy with the look and so I included it when I did the quilting.

The other day a package arrived for me from SAQA, it was beautifully wrapped. 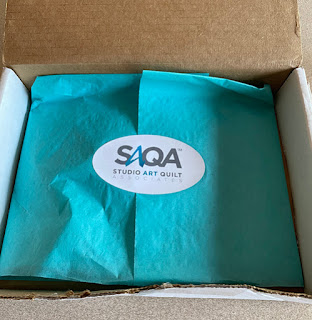 Inside were some goodies as a thank you for the Lightening talk I recorded on Working in a Series at the Conference last month. 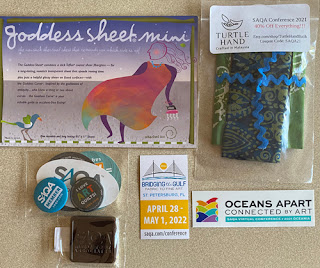 Thank you SAQA, I was thrilled to receive the gift.

Nice gift package!!! And your Grace Crowley piece is WONDERFUL!

Thanks Robbie, I have forgotten how nice a little thank you gift is to receive.
I have to do another 2 quilts in my Grace Crowley series!

I would say your piece paid a wonderful tribute to Grace Crowley. I'm sure she would have been pleased. And a fun package in the mail, what could be better than that!

Thanks Magpie Mumblings, I am working on my 2nd Grace Crowley piece now, we have to do 3 in a series.

Lovely to receive a thank you gift

I agree, Jude, it was a lovely gesture, it reminds me that I must remember to do that myself sometimes.